A Quick Visit to the Enterprise
Not the air craft carrier, the space ship

Indulge MeanMesa for a paragraph or two.  We can benefit from a short visit to over view a few scenes from an episode of Star Trek, in this case, from the "New Generation" series.

While Captain Picard and half a dozen children are in the turbo lift, something happens to the ship.  The Captain is injured and disabled, and the turbo lift is stuck between decks.  The children, little boys and girls attending school aboard the Enterprise in the story, are all around ten years old.

After a few minutes of dramatic acting, it is clear that the Captain is hurt too badly to solve the problem.  He asks the children if they have any ideas which might help.  A ten year old boy in the group offers [roughly] the following:

"We can reverse the polarity on the turbo's main drive coil by withdrawing the power feed injector and re-routing the main drive circuit bus.  Then we can divert the low voltage lines from the turbo cabin's passenger control bank, and feed it into the retractor mechanism to free up the lift and restore the turbo function."

[By "roughly" MeanMesa quickly admits to not having the precise script.  However, that is not the point to be made, here.]

We can enlarge our perspective to include an even greater body of technology at work in a day to day process.  Although the sets for an episode of Star Trek is usually contained within the ship,  Of course, there are other ships just as complex technologically as the Enterprise, but there are also farms and factories.

In fact, according to the script, there are worlds -- many worlds.  The government behind the Enterprise isn't called the Federation of Planets for nothing.

Every tiny glimpse of such a civilization, regardless of where one might be standing at the moment, would reveal sophisticated, complicated, complex technology everywhere, performing every imaginable sort of work.  Of course, there would be computers, but connected to those computers would be a dizzying array of other equipment.

A "federation" of 23rd Century planets filled with people would require a great deal of work just to keep going, and, if the vision of Star Trek is an even somewhat reasonable estimate of future conditions, more than an elite few would need to be able to operate, program and repair all that machinery -- many more than an elite few.

In fact, for the worlds of Star Trek's "Federation of Planets" to work, hundreds of millions or billions of people would need to be "educated" in a way quite beyond what we might think of when we said that word in 2013.  Those millions of people operating, and perhaps more importantly, understanding those billions of machines would not have found the ten year old's suggestion at all remarkable.

With not too much a "stretch of imagination," we arrive at a rather unsettling conclusion.

The processes of "education" being employed today could not possibly "educate" the millions or billions of Federation citizens to the level required for the civilization to function.  Our modern system would fail in two important aspects.

First, although it might be conceivable to educate a student to the far advanced level required for expertise in a number of very narrow areas of technology, but for that student to be functionally "acquainted" with a wide set of technological applications would be out of the question.

Second, the time required for a student to become thoroughly "educated" in even a few narrow fields of technology -- either fundamentals or applications -- in the current scheme amounts to decades.  The cost of such an education continually expands as the course work becomes more and more advanced, and the curriculum becomes more and more exclusive the higher the student advances.  There is neither time nor resource for broadening expertise with "out of specialty" course work.

We can easily think of these issues at the university or graduate levels, but we will also have to start thinking of the same issues at high school, junior high and elementary school levels.

Anticipating a future similar to the one we can glimpse in Star Trek episodes, we have a very bad feeling that we're really not meeting the challenge at any level.  Further, that "challenge," while it may be the case today, will not be judged in the future on any metric devised by educators or politicians.  Instead, we would watch a gradually increasing series of technological disasters as society enviously embraced the advantages of advancing technology but failed to produce citizens capable of operating it.

New Mexico, home for MeanMesa and Short Current Essays, is a contemporary example of this.  Jealous of the modern processes in other, more educated states, New Mexico has rushed precariously into the duplication of these technologically advanced societies without a population of workers with the fundamental literacy required to actually provide the staff to run them.

The examples are heart breaking, but quite immediate.

Convicted murderers are released from prison after mistakes running State record keeping software.  New Mexico drivers with a dozen DWI arrests continue to have prosecutions dismissed from a failure to schedule testimony by arresting officers.  Failure to collect property tax -- for years and after all kinds of property development -- is routinely "discovered" amid the chaos of records in an assessor's office.

The high school graduation rate for Albuquerque is in the 55% range.

This list of examples could be increased to an alarming length.

Perhaps most discouraging of all, this social catastrophe is comfortably accepted as a calamity without remedy.  Not only is there no promising plan to remedy it, there is no particular interest, either.

Interestingly, there is essentially no denial that our world is advancing to an exponential adoption of new technology. It will be neither a sudden discovery nor an entirely unexpected development when we find ourselves mortally reliant on the technology while unable to direct or operate its function.

The two propositions contradict each other -- they are paradoxical.  It is a paradox demanding constant service -- even among those ostensibly "wise enough" to know better.

While we have been discussing technological literacy,that is, the knowledge require to operate a civilization based on advanced technology, there is another side to what is required.  The information or wisdom of this "other side" has everything to do with furthering our collective experience as humans.

Without this, the technology itself will destroy our future -- and, probably, us, too.  We've come close enough to this in the recent past.  Thankfully, during that last episode -- nuclear Mutual Assured Destruction -- the mass of populations constituent to the folks with their fingers on the button had an understanding of this other kind of literacy adequate to dissuade their leaders.

The technological capacity to construct intercontinental ballistic missiles was, in that past encounter, balanced by knowledge originating in the likes of humanities, poetry and philosophy.

We face the consequences of a similar illiteracy today.  The voices currently defining the nature of "necessary" economy, "necessary" conditions and standards of living and other awkward contemporary "necessities" validate their models with highly technological justifications and priorities.

This headlong rush to "necessary" economic and social "efficiency" is countered by the voices placing greater value on "operating the species."  This natural inclination to demand a balance between the sides contemplating our path forward is the fundamental basis of the modern conflict.

Having said all that, it would be easy to argue that our problems derive primarily from education, that is, that education, somehow, would mitigate the conflict.

Not the kind of education we are conducting currently.

Disabuse yourself from any imaginary image of modern education you may have -- especially if it one which implies a process which will -- autonomously -- gradually correct itself.  The current process measures its own success in ways disturbingly similar to the disastrously artificial metric directing its efforts classrooms.

In fact, contemporary education will not only not solve this dispute, it is a primary contributor to it.  By this, MeanMesa is referring to both kinds of education -- the technical and the humane. In a social culture which MeanMesa has frequently described as one of "intellectual tyranny" the humane has, unnoticed, slipped into the role of "secondary model."


The Paradigm of Stupidity

The ten year old in the turbo with Captain Picard didn't concentrate his studies on turbo lift mechanics.  We can assume that all manner of things are taught in the Enterprise's class rooms, yet, there he was -- quite well equipped to propose a mechanical "fix" to a situation which would have paralyzed Princeton's physics department for a decade.

To validate the title for this section, we'll need to take a hard, cold look at the education paradigm we've gradually created.  Just as is the case with very many "modern" things, we see a "free form" dinosaur creeping toward an unknown goal, moving with the inevitable inertia inevitably enjoyed by anything obsessively seeking validation from hundreds of years of questionable past performance, a crushing void of imagination and a statutory annual domestic budget of billions of dollars.

In the larger picture it has been the consistent intention of humans to value the accumulated knowledge and experience of the species and to feel absolutely compelled to share that history generously with the young.  While there may have been many incentives to expand the human understanding of just about everything, one principal motivation has been precisely this almost organic impulse to guarantee that future humans know continuously more than previous humans.

The necessary acceptance of the profound responsibility of educating the young has atrophied amid competing priorities.  The old species-wide determination to be creatures with a perpetually improving grasp on all things, all knowledge, all thought and all possibilities has ebbed, a victim of shifting values which seem committed to permanently obliterating the historic passion.

Now, we find this "chicken arriving home to roost."  The educated elite have dutifully provided the technological advances we've craved, but that craving has clearly overshadowed human "species fundamentals" with alluring trinkets.  Although now obscured in the mad rush toward even more technology, both the technical and the humane have been consumed by the allure of voracious, intermediate applications. 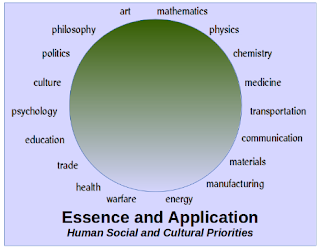 The "arriving chicken" may be most visible in our growing inability to balance our infatuating new toys with more mature "duties" incumbent on our basic natures, but those other areas of humane interests have accompanied that descent.  The population of humans participating in such necessary creative efforts has declined to reveal an increasingly minuscule elite class with the background fundamentals, creativity and resources to create.

The great remainder of humanity is relegated to consuming -- and occasionally, fighting over -- what has been created.

Education has been transformed in a predictable way by the collateral transformation of the basic values which have driven it historically.  The success of the process of education has been coarsely married to a new, competitive metric as if all those interested in the task were interested only in preparing consumers capable of utilizing the constant arrival of the "latest creations."

The education industry has succeeded in crushing the innovative spark with which humans have accomplished so much in our past.  The industry has also refined, groomed and mastered its new credentials of self-judgement, effectively promoting the new idea that no one else can correctly evaluate the "great success" of the "modern technique."

Considering the results, it is a well educated version of the ancient adage concerning the Emperor's new clothes.

MeanMesa will return to this topic in a future post.  It is high time for a frank discussion not on the nature of education, but rather, on the nature of knowledge.  Specifically, we can no longer avoid the physical difference in a person before and after he has learned something.  If just a few nagging technological issues can be resolved, there will be a free offering, too!