July in the High Desert

This old brain, seeking some comfort from the relentless arrival of such "very bad news from the front," found itself in a silent reconciling waltz with an old friend, M. Aurouet, that is, Mister Voltaire, and specifically the final words of the bravely undauntable  Candide.

During the past month, MeanMesa has suffered the mind numbing ennui of the conquered who still await the victor's lash.  Of course, the time was pleasant enough, spent mindlessly languishing -- unperturbed by dark invading thoughts from the world --  amid the glorious sunlit days and the sudden wet coolness of the season's unpredictable high desert monsoons. 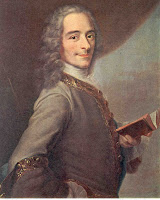 "Work then without disputing", said Martin; "it is the only way to render life supportable."

The little society, one and all, entered into this laudable design and set themselves to exert their different talents. The little piece of ground yielded them a plentiful crop.

...Pangloss used now and then to say to Candide:

"There is a concatenation of all events in the best of possible worlds; for, in short, had you not been kicked out of a fine castle for the love of Miss Cunegonde; had you not been put into the Inquisition; had you not traveled over America on foot; had you not run the Baron through the body; and had you not lost all your sheep, which you brought from the good country of El Dorado, you would not have been here to eat preserved citrons and pistachio nuts."

"Excellently observed", answered Candide; "but we must cultivate our garden."

And, although perhaps waxing poetic, it was to precisely this lofty destination to which MeanMesa cast sail, seeking some quiet relief -- no matter how synthetic -- from the maelstrom of deceit and intransigence which has fallen on our country.

MeanMesa's July was spent in the gardens.

[Note:  You can click on any of these photos which may have been truncated by the Blogger.]


The tiny garden spot behind the apartment is about 2 1/2 feet wide, but it offers plenty of room for a few tomatoes, plenty of marigolds, a nasturtium here and there and some durable, volunteer four o'clocks.  The sunflowers shade the tomatoes from the blazing New Mexico heat in the afternoons, but they still allow enough through to create wonderfully delicious home growns!

A few blocks away the garden invaded all the little spaces around an aging building.  When things began, the soil was miserable New Mexico caliche -- as hard as rock and utterly devoid of the organics which make plant life possible.  Then a couple of MeanMesa's hard working helpers hauled in a trailer load of horse manure.

Once it was spread out in the sun for a few days, it all "cooled down" enough to be mixed with what was there.  A great compost pile was established right away, and raised beds were constructed along the most desolate, sun baked part of the place.  More steadfast volunteers rubbed the manure through a screen of construction fabric, and the planting began. 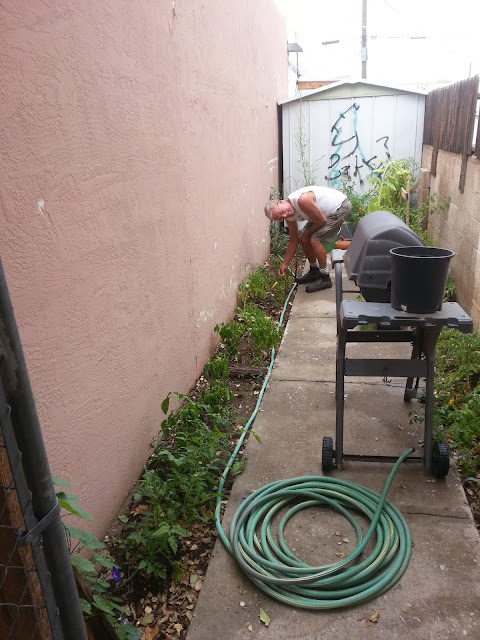 This thin little spot on the East side was devoted to the "salsa garden."  On the right are some eager, out-of-control heirloom tomato plants, and on the left a nice variety of peppers and chile's started producing in almost no time.  There weren't enough sweet onions to provide for the whole season's salsa making, but for the first few batches, they provided a great, juicy ingredient.  There were even a few tomatillos planted in buckets.


Along the North side these squashes and melons found a great spot for their vines and fruit.  Those are giant Russian sunflowers and amaranth providing a little shade.  The amaranth and marigolds  serve as pest control, although by mid summer this little garden had an ominous infestation of squash beetles.


This is the amazing potato patch along the West wall.  The corn rusted out a little, but the potatoes loved this place.  The compost pile is just behind that stake wood fence.
This photo shows what the soils looked like in the back of this building.  The raised beds offered good water conservation, some wind protection and -- with cardboard lining -- a stable separation from the existing soil.  Without the cardboard, the clay leeches up though even the best garden soil.  Planting in the matured horse manure offered really good water retention so everything didn't dry out too much between watering.

The white barrel in the background is for squash bug repellent.  The "recipe" came from the Internet -- cayenne, cloves, garlic bulbs (unpeeled and quartered), a little cooking oil and a bit of dish detergent.  The ghastly brew can be heartily recommended for any squash or melon gardeners facing the devastation of the beetles.  It's unlikely that it killed them -- which would have, of course, been fine -- but it definitely seemed to "drive them off."  The hope is that they starved before they could locate the next squash patch.

These are some more of the raised planters.  The amaranth definitely found its home here.  For those visitors unfamiliar with the plant, it is an edible grain with a long heritage -- there are a number of references to it in the Bible.

Amaranth:  A large family of plants that includes weeds and garden plants.  Goodspeed translates the amaranth, also called the "rolling thing," of [Isaiah 7:13] as the tumbleweed.  It is also called the "resurrection plant" and the "rose  of Jericho."  The Greek word for amaranth means "unfading."  This describes the bloom's ability to retain its color when dried.  This meaning is used symbolically in [1 Peter 1:4] and [5:4], where the inheritance of the faithful is described as unfading.  Thus, the amaranth became a symbol of immortality.
(read article here)

It creates a good barrier to common insect pests -- either discouraging them or, if they eat the leaves, apparently acting as a pesticide.

The old car rested in the New Mexico sun because the bicycle filled all the needs for such local travels.  Afterwards, the heat of these little trips was happily shed with delicious, long, slow laps in the pool to strip away the dust and sweat.

All this rustic, rural reminiscing would hardly suffice for a MeanMesa post under more ordinary conditions, so why is all such maudlin sentimentality "spread so brazenly thin" right here?

Those hours in the garden had a dark purpose.  They offered a false, but  paralysing, refuge from disenchantment.  The onerous burden of psychological destruction fomented by the enemies of democracy had taken its toll.  MeanMesa needed time to heal and psychically rebuild.

All these tedious doldrums of inaction on the blog did not escape unnoticed here at Galactic Headquarters, either.  Old MeanMesa sought some small comfort with the over worn excuse of "writer's block" -- perhaps more modernly described as "blogger's block" -- but even this hackneyed old ploy failed to quiet MeanMesa's restive nerves or somehow assuage the suspicious pangs of conscience as this old bird countenanced such a glaring irresponsibility.

What was it?  What grave tedium had so brutally stripped away the spirit of this erstwhile energetic, albeit geriatric, blogger?  What conditions had cruelly evaporated all but the final, last tragic remnants of the old "will to live?"

It was, clearly, a time for "hauling oneself up by the bootstraps," that is, the dawn of August brought forth the cold reality of the moment, a clear view of the necessity of some painfully penetrating self-observation.

The conclusion following the inquiry of this "moment of truth" was unsettling.

The reactionary forces now rampaging, the mindless ones plodding over our beloved country had actually -- although, happily, only temporarily -- suffocated that old spirit.  The relentless insults of the tea bags and their drooling minions had momentarily crushed MeanMesa's will to fight!

This malaise of a "thousand cuts" had plunged MeanMesa's old head into an ocean of oatmeal -- and not fresh, steamy oatmeal -- cold, crusty, sour, day old, oatmeal.  It was a black and white, dreary, high desert Sargasso, bereft of either current or wind, abandoned by that old fire which had been such good company before.

From the famously complete dogma in catechism MeanMesa was left finally ready for self-indictment under the essentially universally convenient "Sin of Despair."  A look at the country surrounded the Galactic Headquarters provided no prospect of anything particularly comforting.  The craven ambitions of the oligarchs on one side and the mindless, ineffectual mumbling of Democrats on the other seemed to present only a long, hot road with implacable walls of either side.

The despair was palpable.

Perhaps the saddest element of this development was that even historically rambunctious MeanMesa seemed to have finally "given up the ghost."

This sad state is the dream of the oligarchs and their governmental puppets.  This is the fantasy paradise these rapacious  billionaires have long imagined and conspired to create -- a dismal world populated only by drawling hill billies and bigots, every one nodding in comatose approval of the next unthinkable outrage flowing into the grisly mix, that is, a world where everyone else, exhausted by the relentless assault, had finally grown stoic, hopeless and uninterested.

In this nightmare vision of theirs the hope was that folks such as MeanMesa would also become unavoidably exhausted and derelict, a new eyes down, grey faced companion to the zombies stumbling out of WalMart.

Well, billionaires, oligarchs and Bronze Age manipulators, your gambit may have "lost steam" before reaching the finish line here.