MeanMesa Has Been Here Before


Here's the link to a fun and informative previous MeanMesa post on this subject.


If you happen to have missed this in September, take a minute and have a look.

The ballot issue has been quietly "puttering along" as it creeps into the depths of a "non-election autumn."  With the scheduling complicity of the newly re-elected Republican Mayor and the "suddenly discovered" Republican City Council -- we elected Democrats to run the City Council -- this ballot has been strategically delayed to a date where literally no one is expected to bother to vote.

No one, that is, except the marching horde of obedient catholics and other momentarily inflamed, single issue "abortion camp followers." 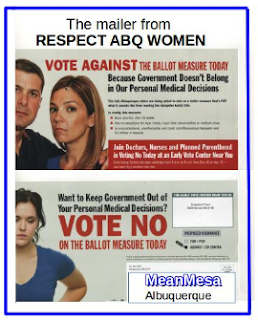 MeanMesa received this mailer from the leading local opposition to this imported monstrosity, RESPECT ABQ WOMEN [link to respectabqwomen.org here], so it seemed as if it might be constructive to visit this topic again.

When the news story that the New Mexico Archbishop was making a special descent from his "church and state separated," normal, "tax exempt," parochial haunts in Santa Fe to Albuquerque in order to tell all the local congregants to vote for the abortion ban, MeanMesa had to jump back into the scrap.

No doubt, something was clearly overlooked in the seminary course work which explained matters such as "church and state sparation" or "tax exempt, hence non-political" to all the righteous lads dreaming of being an Archbishop in some glorious future.  Without the lesson of that judicious caution, every tid bit of ecclesiastical restraint was miraculously vaporized, clearing the way for the "Archbishop mobile" to blissfully import such militant piety on the journey South on I-25.

MeanMesa can clear the air a bit.

It's NOT OKAY for fire breathing zealots from Kansas to show up with this little "dog dropping" all written out, signed, sealed and delivered in Albuquerque.

It's NOT OKAY for a Catholic Archbishop to show up, issuing instructions for voting in an Albuquerque election.

[A MeanMesa note:   There is no shortage of voices anxious to mitigate the church's historical bad behavior by noting the immense scope of Catholic charities.  Roughly 60% of the resources to operate those "charities" which so glorify the Vatican's famously magnificent altruism are provided by the US Federal Government. {source here}]  Archbishop Michael Sheehan would very much like to have a spot in your bedroom -- and in your doctor's office -- whether you are Catholic or not.  If it's "too heavy a lift" to persuade you to become a member of his mythological flock, maybe the next best thing is to have to courts compel you to conform to Catholic obedience under force of law. 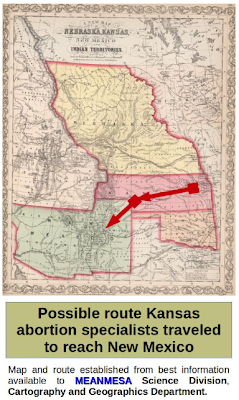 The thing apparently made its way from the wheat fields of Kansas to New Mexico strapped on the bed of a "low boy" 18 wheeler.  Curious about this, MeanMesa immediately called the staff in the Short Current Essays Science Division to fill in the questions.  After a few days of expensive consultant work, the following map was produced.

Because the field of inquiry was so definitively Medieval to begin with, part of the challenge faced by the consultants, and. of course, the MeanMesa Science Staff, was to locate a map of the area from roughly the same period.  So, for better or for worse, they came up with this.

Let's Look At The Ballot

These comments are excerpted from a KOB story:

It’s long, it’s verbose, it’s confusing – and those are just some of the nicer things people are saying about the ballot in Albuquerque’s special abortion rights election. Some call it the worst ballot in the history of the city’s elections.

“In my 70 years I have never seen such a convoluted presentation on a ballot – ever!” That’s what Lou Salm said this morning after voting at one of the city’s twelve early vote sites. “This is terrible I think. It’s totally confusing.  Frankly, I think it’s confusing for both sides.”

A quick glance at a sample ballot tells the story: there are 12 subparagraphs in section 2 alone, and section 3 has 27 subparagraphs and sub-sub paragraphs. All in all it’s about 1,500 words – a proposition to outlaw late-term abortions, anything after 20 weeks of pregnancy.


The ballot itself is equally unwieldy. 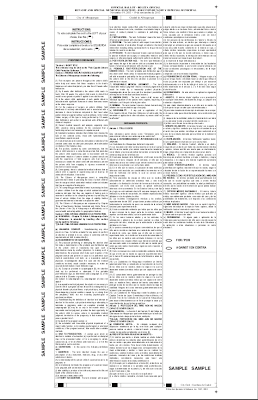 MeanMesa's first impulse was to simply include a "jpeg" copy of the thing which could have been effortlessly snatched from the City Of Albuquerque's web site.  That would have looked something like this. [left]

Thinking that some MeanMesa visitors would prefer a copy which was actually readable [This blog has some GREAT visitors!],  the thing required a little cut and paste.  The final product was three separate images: the top, the middle and the bottom.

So, if you actually want to read all of the ballot proposition, have at. [Just click on the image and open a new tab -- the letters will be readable.]

The top third of the ballot. 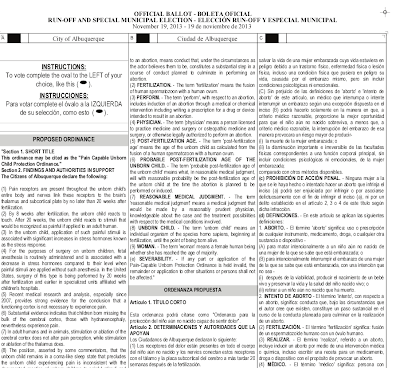 The middle section of the ballot. 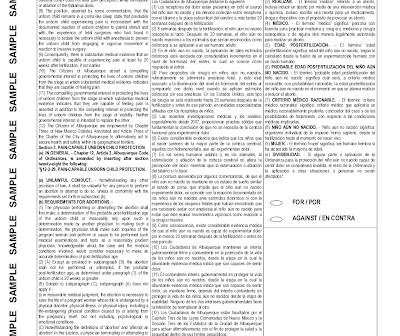 And, the bottom of the ballot. 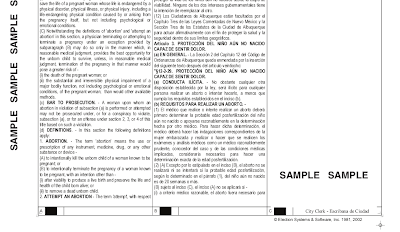 There you have it.

Pass this thing through a nearly invisible election where only single issue abortion voters turn out at the polls, and the dirty shirt preachers from Kansas along with the Archbishop are effectively in control of your sex live.  Actually, there could be an equally unpleasant interim period right after the election where everyone sues everyone else, and the City of Albuquerque drops a couple of million trying to defend it.

A "gift that keeps on giving."


Well, What Can Be Done?

The schedule for this nasty business is straight from the ALEC play book.  It's going to be a single issue election -- already costing us plenty, by the way -- stranded derelict in the middle of November.

But hold on a minute.  Not even NM ALEC is in charge of scheduling elections.  To get that done requires a complicit local City Government, but, that's not a problem, either.  There were no voices of complaint raised from the Mayor's Office or from the now "gerrymandered" City Council illegitimately controlled by an unelected minority of Republicans.  All those folks thought that an easily forgettable, almost guaranteed low turn out, cold, windy day in November would be just swell.

All this wouldn't amount to much more than "geriatric ranting and raving" if the deceptive scheme were not actually producing results.   Both the Archbishop and ALEC know that the thing has basically a zero chance if people actually show up at the polling stations.  Yesterday, MeanMesa was chatting with friends about this on FaceBook when the following comment surfaced.

"No, I just haven't paid attention. Just assumed the vote was on, well, election day. Makes sense, ya know."

Well, the vote is NOT on any recognizable election day.  It is cravenly sequestered, considering its calendar location, in the middle of no where.

So, given this troubling state of misinformation and misdirection, MeanMesa will trot these old bones out with a sign -- a little something that can be produced at home with only a modest effort.  My poster will look something like this:

An hour or two standing on the Lomas side walk should do the trick.  Getting any ideas?  A little company would be nice.