Nestled in safely beneath zombies and the Congress, American CEO's enjoy a position somewhere around third place with respect to public disdain.   A common "water cooler" discussion about the "burning question of the day" will almost inevitably lead to the open castigation of this 10% class of the rich and powerful.

Among our fellow travelers in the lower castes, one encounters an understandable sort of grumbling, stoic, envious class petulance, but, setting aside the pitchforks and torches for the moment, these parasitic economic creatures are also officially "fair game" for MeanMesa because they are literally sucking billions of dollars out of the stumbling US economy every year -- and, thanks to the tax code, doing it legally.

In this series of posts addressing the prospect of  "Raising Taxes" we are looking carefully at some of the "topsy turvy" fiscal anachronisms currently in place -- legislative tax code peccadilloes which should have expired quite ignominiously during the FDR administration.  If we intend to complain about these things -- and we should -- we need to be armed with specifics.

We might find it easy enough to simply burp, belch and scratch while taking "pot shots" at these "free enterprise" interlopers, but be advised, they bite back. We find what amounts to an encyclopedic compendium of faux ideological "narcotic and soothing" misdirection, misrepresentation and out right lies like a storm cloud obscuring the insults being inflicted by this bunch.

In fact, in the context of discussing economic rebuilding, the carefully constructed, almost sacred legitimacy of this same group is energetically protected by relentlessly repeated, perpetually specious "talking points."

After all, they also own the media.

To put it another way, this bunch owns the portfolios which contain the stock shares of the holding companies which own the media.  They also tend to be comfortably seated by almost inter-generational, monastic "divine right" on the boards of directors of all those ethereal, vampire-like, corporate structures.  All this nonsense includes a direct line to the network "mouth junk" experts we listen to while we watch the corporate media "news" each evening.

We're not talking exclusively about FOX and News Corp here, either.  The "alphabet networks" are in almost identical cess pools as the bone pit where we find Murdoch's grotesquely over grown hate factory.

For this post we will take a hard look at this abnormal class, their ambitions, the mechanisms of their extractive schemes, their destructive impact on the economy in large and possible solutions to their continuing, suffocating economic death grip. We must focus on money flowing from the federal general fund to this particular class of oligarchs.  This is precisely the data we need if we are interested in limiting their impact on our federal deficit.

WASHINGTON -- More than one-third of the nation's highest-paid CEOs from the past two decades led companies that were subsidized by American taxpayers, according to a report released Wednesday by the Institute for Policy Studies, a liberal think tank.

"Financial bailouts offer just one example of how a significant number of America's CEO pay leaders owe much of their good fortune to America's taxpayers," reads the report. "Government contracts offer another."

IPS has been publishing annual reports on executive compensation since 1993, tracking the 25 highest-paid CEOs each year and analyzing trends in payouts. Of the 500 total company listings, 103 were banks that received government bailouts under the Troubled Asset Relief Program, while another 62 were among the nation's most prolific government contractors.

Many of the companies appeared multiple times on the annual top 25 list, with Bank of America appearing 18 times, Citigroup appearing 15 times, while Morgan Stanley and American Express each secured 12 slots. JPMorgan Chase CEO Jamie Dimon has landed on the list twice since the bank received $10 billion under TARP, and American Express CEO Kenneth Chenault has appeared three times since his company accepted $3.4 billion in bailout money. Goldman Sachs received $10 billion under TARP, and made the list seven times in the past two decades, once after receiving its bailout. Washington Mutual and Lehman Brothers, both of which failed in 2008, also appeared on the list, with Leman making eight appearances before filing for bankruptcy.

Banks piled on financial risk in the years leading up to the banking crash, fueling record profits from their investments. Those high profits translated into strong "performance-based" bonuses and stock compensation. But when the risk backfired in 2008, companies either collapsed or were rescued by taxpayers.

Citigroup, Goldman, American Express and JPMorgan declined to comment for this article. Morgan Stanley emphasized that the company has not appeared on the list of the 25 highest-paid CEOs since receiving TARP money. Wells Fargo told HuffPost that its CEO pay packages were necessary to retain top talent; the bank received $25 billion from TARP.

The "protective talking points" mentioned above become clear when we examine the corporate justification of these atmospheric CEO compensations in the light of the failure of the corporations they were managing and the amount of tax money these businesses were consuming.

"We take a disciplined approach for determining compensation based on four principles: pay for performance, promote a culture of risk management that avoids unnecessary or excessive risk taking, attract and retain highly qualified executives with competitive pay, and align executives' interests with those of stockholders," Wells Fargo spokesman Michael McCoy said. 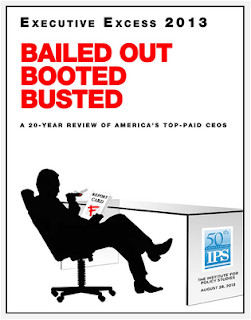 Nearly 40 percent of the CEOs on the highest-paid lists from the past 20 years were eventually "bailed out, booted, or busted."


This 20th anniversary Executive Excess report examines the "performance" of the 241 corporate chief executives who have ranked among America’s 25 highest-paid CEOs in one or more of the past 20 years.

The lavishly compensated CEOs we spotlight here should be exemplars of value-added performance. After all, sky-high CEO pay purportedly reflects the superior value that elite chief executives add to their enterprises and the broader U.S. economy.

But our analysis reveals widespread poor performance within America’s elite CEO circles. Chief executives performing poorly — and blatantly so — have consistently populated the ranks of our nation’s top-paid CEOs over the last two decades.

The report’s key finding: nearly 40 percent of the CEOs on these highest-paid lists were eventually "bailed out, booted, or busted."
Over the past 20 years, we have seen no shortage of creative and practical proposals for reining in excessive executive compensation. Three pending reforms strike us as particularly urgent:


[You can download the "pdf" and read the entire IPS Report here.]

Returning to the Institute of Policy Studies, we can add a little to the Senate bill, S. 1746, which would put a cap on the amount of CEO pay considered "deductible" on corporate tax returns.  Take a look at the following excerpt. [Read the entire article here.]

A bill introduced late yesterday by Senators Richard Blumenthal (D-Conn.) and Jack Reed (D-R.I.) would close a loophole that currently serves as a taxpayer subsidy for excessive CEO pay. The Institute for Policy Studies has been calling for a fix to this outrageous glitch in the tax code for two decades.

Under current rules, corporations can deduct unlimited amounts off their income taxes for the expense of executive stock options and other so-called “performance-based” pay.

“The more corporations pay their CEOs, the less they pay in taxes,” notes Sarah Anderson, a co-author of 19 annual IPS executive compensation reports. “This loophole creates a perverse incentive to pay executives excessive amounts, while ordinary taxpayers wind up paying the bill.”

The just-introduced bill, the “Stop Subsidizing Multimillion Dollar Corporate Bonuses Act (S.1746),” would cap the tax deductibility of executive pay at $1 million, with no exceptions for “performance-based” or commission-based pay. The cap would extend to all employees of all companies that are required to file periodic reports with the Securities and Exchange Commission.

In May 2013, IPS published a report that was the first to put a price tag on the tax breaks specific corporations have enjoyed from this loophole. The report found that the 90 publicly held corporate members of the ‘Fix the Debt’ lobby group raked in at least $953 million — and as much as $1.6 billion — from the “performance pay” loophole between 2009-2011.

UnitedHealth Group enjoyed the biggest taxpayer subsidy for its CEO pay largesse during this period. The nation’s largest HMO paid CEO Stephen Hemsley $199 million in total compensation, of which at least $194 million was fully deductible “performance pay.” That works out to a $68 million taxpayer subsidy – just for one individual CEO’s pay. In 2012, Hemsley pocketed another $28 million in “performance pay,” which computes into a tax break for UnitedHealth of nearly $10 million.

“At a time when Congress is considering major cuts to basic services for ordinary people, it’s unacceptable to continue to allow highly paid CEOs to benefit from this loophole,” says IPS Associate Fellow Scott Klinger.

FORTHCOMING CEO PAY REPORT: On August 28, IPS will release the 20th anniversary edition of “Executive Excess.”The report looks at the top 25 highest-paid CEOs for each of the past 20 years. It calculates how many of these “successful” top executives wound up getting fired, led firms that received financial bailouts, or had to pay massive fines or settlements for fraud.

Consequently, MeanMesa arrives at the roughly $1 Bn annual savings -- money which is currently flowing out of the federal budget as deficit into the pockets of these "ultra valuable" corporate CEOs.

One might consider a sum of no more than $1 Bn to be of little help in reducing the annual deficit, but this particular $1 Bn is fueling a respectable part of the corporate incentive toward the massive bribery and corruption of the Congress.  While the precise amount may be small, the mischief caused by its constant temptation leads to the very legislation which serves the oligarchs so well.

While looting a country, efficiency is immediately replaced by lethal, pragmatic impulse.  It doesn't really matter much if a scheme will cost the country or the government $100's of Bn if it allows you to pocket just $1 Bn completely your own from the damages.