The "Gift That Keeps on Taking"
The George W. Bush "Christmas"

Most Americans with whom MeanMesa visitors might be acquainted need very little "prodding" before expressing the lingering bad taste of the W.'s $1+ Tn dollar emergency bailout to the bankers in 2008.  Yes, it turns out that the thing was a scam.  The glistening surface of the scheme was dutifully painted with bright sugary icing as a desperate, immediate necessity, but, predictably, when it came to the monster's long term economic damage, "the devil was in the details."

Now, five years later, those "devilish details" have everything to do with paying back the money.  Surprisingly, beyond the very reasonable cynicism of the average American who "footed the bill" on the Bush bailout, a remarkable number of the recipients of TARP money [along with some additional funds from other bailout sources] have paid back their loans -- in a good number of cases with "profitable" increases.

One of the most informative sites for those interested in a detailed picture of "who has done what" with respect to the massive bailout can be found at ProPublica.  While the graphic at the right, shown here only as an example, is merely a screen shot of the Pro-Publica page, a visitor to the actual site will find a massive, interactive spread sheet which details every dollar of TARP money, its destination during the bailout and the current status of the account.

On the actual Pro-Publica page, you can click on the name of one of the bailout recipients, and the site will pop-up the entire account details of the amount provided, amount repaid or still owed, dividends paid and so on.


MeanMesa selected JP Morgan from the list, popped up the account details and took a screen shot [in two pieces -- top and bottom].  When you make any selection from the list of bailout benefactors, you will get roughly the same analysis of that specific account. 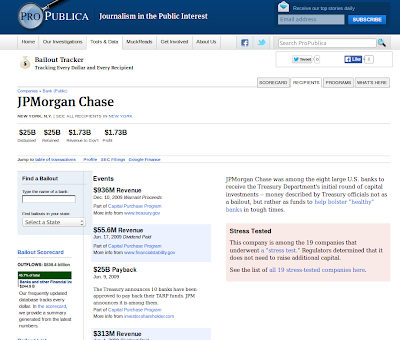 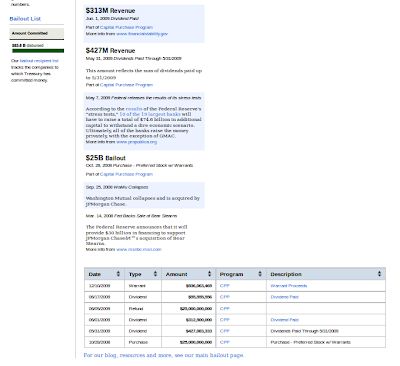 The Bank Bailout
What exactly happened?


The banks on the Pro-Publica spread sheet were, at the time the financial system collapsed under its own weight, functioning in a "pre-Dodd-Frank" mode, that is, they were, again at that time, completely free to legally mix their high risk/high return gambles right in with their "regular bank" money which came from deposits, loan payments, mortgages and so on.

However, this post is not about the Dodd-Frank bill or the upcoming [April 2014] Volcker "addenda" which are both intended to rationally limit the damage from banks' irresponsible risk habits.  This post is all about what can be done with the lingering financial damage of the Bush W. bailouts.

It may be a suitable moment to review the basic "business model" of a bank.


Generally speaking, when a bank has money, it can make more money, and, quite predictably, most of the banks which received their share of the bailout's billions have, in fact, made money since then.  Yet, as we look down the list of bailed out banks, we see an impressive total of un-repaid bailout debt.  In fact, the Pro-Publica site spells out the "batting average" for the whole group of benefactors.


Further, the Housing and Economic Recovery Act of 2008 [Pro-Publica Report: Housing and Economic Recovery Act of 2008], designed to pull the federally guaranteed mortgage companies, Fannie May and Freddie Mac, back from their own Wall Street brink, moved another $187 Bn of US Treasury dollars onto the bailout "poker table." When the dust of the 2008 collapse cleared, these two lending institutions remain around $41 Bn in the red.

So, we can add the Fannie and Freddie remaining bailout debt to the uncollected total bill coming from the "regular" banks on the Pro-Publica list.

It's hardly a mystery at this point.  MeanMesa thinks the Congress and the Treasury Department should collect -- preferably the entire $70 Bn -- but at least the $29 Bn still on the balance sheet and use it for deficit reduction.

Of course, there are plenty of other pressing uses for the money, but the owners of the Republican Party will already be screaming is we just go this far.  Freddie and Fannie need to be "repaired" or "replaced" with new institutions which are more stable. A reasonably effective Congress could do this.

The remainder of this debt -- the $29 Bn -- is now -- after five years -- officially "bad debt."  The Treasury Department needs to "own" the banks and corporations which still owe money.

The Treasury took our tax money and propped up the reckless businesses who had managed to slit their own throats during the Bush W.'s mad looting festival.  It's high time that we were made whole after the gang rape.  We of the "less than sparkly" 99% are still daily paying the price for the "missing money" with arcane "punishment tactics" such as phony austerity, management by one crisis after another, hungry children and frothy calls for war with Iran.

We pay that price every time the tea bag losers in the House of Representatives trot out their next horrifying "ogre de la dette colère" ["debt ogre tantrum"] just prior to continuing their toxic attack on every American without a lobbyist.  Yes, these were the same fools relentlessly chanting the "jobs, jobs, jobs" mantra while their Party was rigging the House elections in 2010, but now they are wailing forth only with their last, desperate, new tune "debt, debt, debt."

They borrowed and spent every dime that wasn't bolted down during the W.'s looting festival, and now, they find themselves without any idea of how to pay it back.  Naturally, we find them now "dans le carnaval," spinning incoherently as tragic "one trick ponies" with only News Corps.' Murdoch pulling the reins.

This, however, is without question the bloody political debris from their own past, and cogent American voters know that.  For precisely this reason demands by the surviving electorate that these bailout debts be collected have political traction.

Ideologically, that traction might possibly extend even to the more stable remnant of the Republican base, although the mainstream GOP dinosaurs such as Mitch McConnell and John Boehner will probably, as usual, not see the train coming.

MeanMesa is just "Chuck Full" of snazzy ideas about ways to lower the deficit, cut spending and generally "straighten things out" with respect to the government and national economy.  The media has been spending millions while talking for hours to sell the idea that there is simply nothing to be done.

There's plenty that can be done.  All we need is a Congress that works for someone else besides the oligarchs.

[A special note from MeanMesa:  Compliments to ProPublica for the impressive amount of hard work and good journalism in preparing and presenting the bailout facts and figures.  All of this would have been admirable under better conditions, but while we are "flying blind" without responsible media, it is sincerely appreciated.  Thanks.]