While Senate Republicans are generally oblivious to public opinion about absolutely anything to do with gun control, today [Dec. 9, 2013] they unexpectedly all issued "unanimous consent" for the extension of the plastic gun prohibition.  Now, we watched these same strangely detached Senators gleefully ignore the 90% public opinion polls in favor of back ground checks, so how in the world did this plastic gun prohibition law wind up getting passed?

Of course there were no photographs of any tea party Senators punching the "okay by me" voting buttons from their desks in the Senate Chamber -- because THAT didn't actually happen.  Photographs such as those would have inevitably reappeared on misspelled signs held by their drawling home state tea bag constituents during their next town hall meeting.

[Republicans learned after their 2012 drubbing that town hall meetings were not really such a good idea any longer.  They cancelled most of them.]

MeanMesa has a few ideas how this came to pass, but first let's sample some of the media coverage. 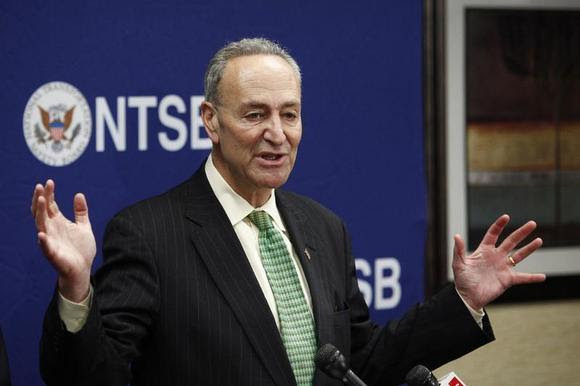 (Reuters) - The U.S. Senate gave final approval on Monday to a bill to renew a ban against firearms that can pass undetected through metal detectors, but rejected calls to update the law in response to the advent of plastic guns made with 3-D printers.

On a voice vote, the Democratic-led Senate passed the bill, which would extend for 10 years the Undetectable Firearms Act of 1988.

The Republican-led House of Representatives approved the bill last week and, like the Senate, refused to pass tougher provisions opposed by the powerful gun industry.

President Barack Obama is expected to quickly sign the legislation into law before the current ban expires at midnight.

Along with many fellow Democrats, Obama would prefer an updated version of the ban to close what are seen as loopholes created by new technologies, such as 3-D printing, an aide said.

Senate Democrats led by Charles Schumer of New York failed on Monday to win quick approval of a measure to require all firearms to include at least 3.7 ounces of non-removable metal essential for its operation.

Without the provision, backers argue, the metal could be taken off the gun, permitting a functional weapon to pass through metal detectors, scanners and carried into supposedly secure areas.

Senate Republicans refused to provide the unanimous consent needed to approve the change on a legislative fast-track.

Democrats then joined Republicans in voting to extend ban, but promised to keep pushing for tougher provisions. A key Republican said he was ready to listen.

Senator Charles Grassley of Iowa, top Republican on the Judiciary Committee, said changes may be needed in the ban, but complained that Schumer sought a vote before many lawmakers understood his provision and what it sought to fix.

"Congress needs to gain an understanding of printed gun manufacturing technology and its relation to permanent metal parts," Grassley said, adding that hearings are needed.

Schumer said he was encouraged by Grassley's comments, telling reporters, "I'm hopeful that we can come to a compromise."
Schumer, who has often tangled with the gun industry on his efforts to toughen gun laws, said the industry has been relatively low key on this issue, and added that he hopes it stays that way.

The ban was first signed into law in 1988 by Republican President Ronald Reagan shortly after the introduction of the Austrian-made Glock firearm. Made largely of synthetic material, the Glock created a fear of undetectable weapons.

That increased with the proliferation of the underground production of plastic guns with 3-D printers.

Democratic Senator Chris Murphy of Connecticut called for an update of the law, saying, "This isn't science fiction anymore .... Someone can make a gun in their basement."

The gun industry favored extension of the ban, but opposed expanding it, saying the proposed modernization of the law would violate the right to bear arms and unnecessarily interfere with the legal production of firearms.

Earlier this year, the gun industry used its political clout to help defeat Obama's bid to toughen gun laws in wake of a massacre at an elementary school in Newtown, Connecticut.

The Center for American Progress, a liberal advocacy group, called it "crucial" to extend the ban, but denounced the measure passed by Congress as "deeply flawed."

"It does nothing to address new technologies like 3-D printing that could allow terrorists and other dangerous people to easily make fully functional, undetectable guns," said Winnie Stachelberg, an executive vice president at the center.

The Senate agreed Monday evening to reauthorize a federal ban on the manufacturing of plastic guns that can't be detected by security-screening devices, putting the finishing touches on a measure that will be sent to President Obama for his signature.

The move makes extending the plastic-gun ban, first imposed in 1988, the only firearms issue approved by Congress in the 360 days since last December’s mass shooting at Sandy Hook Elementary School in Newtown, Conn.


Sen. Christopher Murphy (D-Conn.), a leading advocate of new, stricter gun laws, said “We should be embarrassed” that Congress has otherwise failed to stem the flow of assault weapons since the Sandy Hook shooting.

But the plastic-guns ban prompted rare agreement among Democrats and Republicans in part because the National Rifle Association, which mounted a strong campaign against a series of gun control proposals in the spring, remained silent on the issue of extending the ban on plastic guns.

Senate Democrats attempted to amend the ban by including a ban on new firearms manufactured with 3-D printers, which are of great concern because they can be used to make a gun that would be considered legal even if the only metal piece was detachable. But the attempts failed Monday evening before the Senate approved renewing the ban by unanimous consent.

Now, How Did This Happen?

To be perfectly frank, NO ONE knows for sure what was in the minds of all those tea bags, safely cloistered in their Congressional Senate offices, who responded in favor of the "unanimous consent" email inquiry.  So far as MeanMesa visitors go, no one probably has any particular interest at all about what was in those dark little tea bag minds.

Still, we little people here miles from the beltway can probably dare speculate a bit without going "clear off the rails."
We all know that any vote to limit guns in anyway is toxic to the right wing Congressional patsies who spend all afternoon waiting for their NRA checks.  Actually, of course, those checks don't come from the NRA -- it doesn't really have much money beyond the dollar here and dollar there sent in by the true believers in the deep forest Idaho bunkers -- that is, the ones literate enough to address an envelope.

No, the big NRA cash rolls in from the gun manufacturers.  That six digit stuff is mere cornflowers for the factory -- and stock -- owners in the bullet business.

Let's take a quick look three possible explanations.  We can start with the least likely first.

1.  The well paid Senate "gun servants" were suddenly swept away with shame for ignoring the 90% plus Americans who wanted back ground checks after the Newtown grade school massacre.  When an disobedient electorate failed to simply "let bygones be bygones" following the mass child funerals, the "popularity price" of the GOPCon Senators' arrogant "block background checks at any price" floated into the light.  The NRA checks turned out to not be worth the ding to their approval ratings.

2.  In a very creepy, very strange, dark eerie way, the NRA "remained silent" instead of ratcheting their lobbyists, hair on fire, into the Senate offices at double step screaming campaign funding threats.

"...the National Rifle Association, which mounted a strong campaign against a series of gun control proposals in the spring, remained silent on the issue..."

The owners of the NRA, the gun manufacturers, can't make any money at all with legalized plastic guns.  The attractive feature of such new technology weapons is that they can be made at home with a bag of plastic and a 3-D printer.

3.  The GOPCon Senators realize that they have infuriated large numbers of Americans.  The Congressional Republicans have, now famously and publicly, caused great injury to millions of Americans with their false austerity and brazen generosity to their employers.  At this point they realize the full scope of personal danger present during their exposure while appearing at public gatherings or the increased likelihood of their being aboard a hijacked airliner.

Of course, all this self-serving nonsense is irritating, but we must remember the noteworthy words of J. Trapani:  "New GOP, same as the old GOP..."
Posted by Chad H at 9:28 AM