Just What Are Those Pesky Koch Brothers Up To Now?

Keeping an Eye on the Billionaires in YOUR State


Normally, MeanMesa is reluctant to simply "re-post" a lengthy newspaper article, but this one has made itself a startling exception to that rule.  This is copied directly from The Guardian.  As a visitor to Short Current Essays, MeanMesa emphatically suggests that you take a few minutes to read the entire thing.

Be confident that future MeanMesa posts will reference this excellent reporting.  All the links in the original Guardian article are left enabled in the content as it is quoted in this post.  You can visit the site here.


inSEd Pilkington in New York and Suzanne Goldenberg in Washington

Conservative groups across the US are planning a co-ordinated assault against public sector rights and services in the key areas of education, healthcare, income tax, workers' compensation and the environment, documents obtained by the Guardian reveal.

The strategy for the state-level organisations, which describe themselves as "free-market think tanks", includes proposals from six different states for cuts in public sector pensions, campaigns to reduce the wages of government workers and eliminate income taxes, school voucher schemes to counter public education, opposition to Medicaid, and a campaign against regional efforts to combat greenhouse gas emissions that cause climate change.

The policy goals are contained in a set of funding proposals obtained by the Guardian. The proposals were co-ordinated by the State Policy Network, an alliance of groups that act as incubators of conservative strategy at state level.

The documents contain 40 funding proposals from 34 states, providing a blueprint for the conservative agenda in 2014. In partnership with the Texas Observer and the Portland Press Herald in Maine, the Guardian is publishing SPN's summary of all the proposals to give readers and news outlets full and fair access to state-by-state conservative plans that could have significant impact throughout the US, and to allow the public to reach its own conclusions about whether these activities comply with the spirit of non-profit tax-exempt charities.

Details of the co-ordinated approach come amid growing federal scrutiny of the political activities of tax-exempt charities. Last week the Obama administration announced a new clampdown on those groups that violate tax rules by engaging in direct political campaigning.

Most of the "think tanks" involved in the proposals gathered by the State Policy Network are constituted as 501(c)(3) charities that are exempt from tax by the Internal Revenue Service. Though the groups are not involved in election campaigns, they are subject to strict restrictions on the amount of lobbying they are allowed to perform. Several of the grant bids contained in the Guardian documents propose the launch of "media campaigns" aimed at changing state laws and policies, or refer to "advancing model legislation" and "candidate briefings", in ways that arguably cross the line into lobbying.

The documents also cast light on the nexus of funding arrangements behind radical right wing campaigns. The State Policy Network (SPN) has members in each of the 50 states and an annual war chest of $83m drawn from major corporate donors that include the energy tycoons the Koch brothers, the tobacco company Philip Morris, food giant Kraft and the multinational drugs company GlaxoSmithKline.

SPN gathered the grant proposals from the 34 states on 29 July. Ranging in size from requests of $25,000 to $65,000, the plans were submitted for funding to the Searle Freedom Trust, a private foundation that in 2011 donated almost $15m to largely right wing causes.

The trust, founded in 1998, draws on the family fortune of the late Dan Searle of the GD Searle & Company empire – now part of Pfizer – which created NutraSweet. The trust is a major donor to such mainstays of the American right and the Tea Parties as Americans for Prosperity, the American Legislative Exchange Council (Alec), the Heartland Institute and the State Policy Network itself.

SPN's link to Searle, the Guardian documents show, was Stephen Moore, an editorial writer with the Wall Street Journal. Moore, who advises Searle on its grant-giving activities, was asked by SPN to rank the proposals in two halves – a "top 20" and "bottom 20". It is not known how many of the 40 proposals were approved for funding, nor which may have been successful.

Moore told the Guardian that he is an unpaid adviser to the Searle Foundation, having been a lifetime family friend to Dan Searle. He said the grant decisions were made by Searle's sons and grandsons based upon the late businessman's "commitment to the advancement of free enterprise and individual rights".

The proposals in the grant bids contained in the Guardian documents go beyond a commitment to free enterprise, however. They include:

• an education voucher system to promote private and home schooling in Florida;

• campaigns against worker and union rights in Delaware and Nevada;

• opposition to Medicaid in Georgia, North Carolina and Utah.

SPN's president, Tracie Sharp, told the Guardian that "as a pro-freedom network of think tanks, we focus on issues like workplace freedom, education reform, and individual choice in healthcare: backbone issues of a free people and a free society."

In its grant bid, the Maine Heritage Policy Center asked for $35,000 to support a "research and demonstration project" that would "release residents from extreme government dependency". It would turn the state's poorest area into what the Portland Press Herald describes in its report from Washington County as "a gigantic tax-free zone". 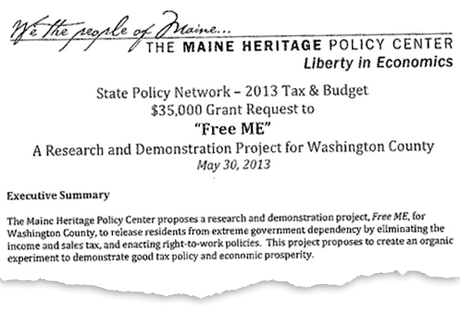 Dubbed "Free ME", the initiative would eliminate state income tax and sale taxes from residents and businesses until the economic conditions in the county rise to the state wide average. The hole in the county's income from lost tax revenues – estimated at $35m a year by the think tank – would be filled through budget cuts.

Medicaid is the target of a grant proposal coming from the Texas Public Policy Foundation (TPPF), an influential think tank funded largely by right wing foundations and corporations including the energy tycoons the Koch brothers, tobacco company Altria and the telecoms giant Verizon. The Texas Observer has investigated the contents of the document and points out that in its request for $40,000 from Searle, TPPF claims credit for blocking Medicaid expansion in the state.

"[S]topping Medicaid expansion is just the first step," the proposal says, adding that the "missing piece to complete our message is an economic forecast" showing how block-granting Medicaid would "bring significant savings" to the state. That information would then be used to garner attention from the media.

The Observer describes TPPF as "one of the most influential state-level think tanks in the nation". One of its former executives was Ted Cruz, now US senator for Texas, who today is the keynote speaker at the national conference in Washington of SPN's sister organisation, the American Legislative Exchange Council (Alec).

Several hundred miles to the north east in Massachusetts, the Beacon Hill Institute requested $38,825 from Searle to weaken or roll back a five-year effort by states in the region to reduce greenhouse gas emissions. The institute said it would carry out research into the economic impact of the cap-and-trade system operating in nine states known as the Regional Greenhouse Gas Initiative.

BHI appeared to have already arrived at its conclusions in advance, admitting from the outset that the aim of the research was to arm opponents of cap-and-trade with data for their arguments, and to weaken or destroy the initiative. "Success will take the form of media recognition, dissemination to stakeholders, and legislative activity that will pare back or repeal RGGI," the funding proposal says.

The Beacon Hill Institute, technically an affiliate rather than a full member of the SPN, operates out of the economics department of Suffolk University in Boston. David Tuerck, its executive director, denied the group had engaged in lobbying. "There is never any lobbying," he told the Guardian. "Maybe I need to look up the definition again, but lobbying consists of buttonholing legislators and other policymakers to get a particular result on a particular issue, and we never do that."

Watchdogs that monitor the work of SPN and other conservative networks in the US said that the centralised coordination of state-level campaigns showed a significant attempt to build local activism into a nationwide movement. Lisa Graves, executive director of the Center for Media and Democracy, which issued a recent report on SPN, said that the local identity of the network's members belied a larger purpose. "They appear to be advocating purely local interests but what they are promoting is part of a larger national template to radically remake our government in a way that undermines public institutions and the rights of workers," she said.

The SPN said that its co-ordinating role was justified because local and state issues were increasingly impinging on national politics. "There's no mystery here," Sharp said. "The whole idea of a state policy network is that individual thinktanks can be in communication, share best practices and analysis, and combine their efforts when they see a benefit from doing so."

Some of the grant bids to Searle focus specifically on prominent local politicians the thinktanks hope to influence. The grant bid that emanated from New Jersey, from the Common Sense Institute (CISNJ), another tax-exempt "research and education organization", floats the idea of a campaign to support the efforts of the Republican governor Chris Christie in ending the ability of public employees to claim untaken sick days and vacation leave in their retirement packages.

"Governor Chris Christie has been waging a war to eliminate this practice; and CSINJ would like to provide ammunition," the proposal says. The thinktank plans to produce a "research study" which it would call "Busting the Boat Checks" – an allusion to the phrase Christie uses to denote the watercraft retirees are claimed to buy on the back of sick and holiday leave payments.

The institute conceives a "media campaign" with its aim being the "full elimination of unused sick and vacation leave payouts".

"We believe our study can be used to sway public sentiment further and be used as a brandisher for reform in Trenton," it says.

CSINJ's president, Jerry Cantrell, denied that the grant bid involved any element of lobbying, insisting instead that his group was providing a service that in the past might have been done by the decimated local media.

"CSINJ is an education organization focused on providing the public with facts and the truth. We don't represent any interest besides the folks who are burdened by this practice – the taxpayers," he said.

He said the proposal was focused on the "abusive practice of accumulating sick or vacation day payments over an entire career and using them as retirement bonus. We've seen too many instances of high level individuals working out the door with $500,000-$750,000 claiming to have never missed a day in 30 years of employment."

The proposal from the Illinois Policy Institute for a campaign to deal with Chicago's government worker pensions crisis by switching to 401(k)-style retirement plans similarly focuses on a politician – in this case Mayor Rahm Emanuel. The proposal says that "Mayor Emanuel has privately expressed the need for 401(k)-style changes to truly achieve reform." 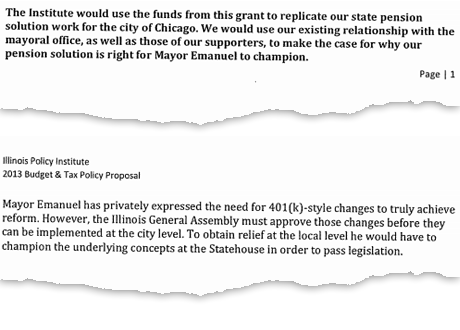 The institute plans to "leverage the leadership potential of Mayor Emanuel … as the spark for wider pension changes in Illinois." It adds that "friendly legislators would be welcome to draft legislation modelled on our policy work and work in tandem with Mayor Emanuel to move it forward in the legislative process."

John Tillman, CEO of the Illinois Policy Institute, told the Guardian that Emanuel had been "an outspoken proponent of pension reform that includes moving to a 401(k)-style, defined contribution system." He saw no problem with the lobbying that the think tank undertakes.

"We are not allowed to do any campaigning or electioneering, and we don't. We are allowed to spend a significant percentage of our expenditures on lobbying and we are very proactive in lobbying for liberty-based policy, including the urgently needed pension reform. We report our activities accordingly."
Posted by Chad H at 8:54 PM