Looking for Revenue
Squelching the Deficit Without Sequester

While it's relatively easy to simply proclaim "raising taxes" as the solution to the ridiculous, self-destructive, Republican "fiscal policy" in which we are currently mired, such a solution requires a few specifics to get things going.  Still, overly simplified solutions, while perhaps never as glamorous as more sophisticated ones, have a habit of still "working out" in the long term.

Our existing federal "fiscal difficulty" is a "three pronged trident."

1st Prong:  The demand economy, still in intensive care after the W.'s massive looting binge and the subsequent tea bag austerity, is far short of the level of demand which would recover the economy.  We have pretended that this was a supply economy since the Reagan Administration, but that road weary, nightmarish phantasm now has neither "feathers nor buttons" left on its cadaver.  That famous "supply side" policy has now become, officially,  a painful and obnoxious corpse neglected in the "dust bin of history" for far too long.

2nd Prong:  The oligarchs, always waiting in the shadows for the next legal opportunity to pillage and plunder, have now created their own, next opportunity.  The current rate of monetary extraction from the national economy into their off shore accounts is atmospheric.  Their illegitimate control of the Congress and the Court stand as Shakespeare's troubling crest of a tide at storm.  Predictably, the prospects for the primary instrument for economic recovery -- increased revenue -- remains firmly in the hands of precisely the same plutocrats who would provide it.

3rd Prong: The economic population of the country -- that is, those who comprise the actual economy -- has been separated from the very economy upon which they rely. The country's "mad hatter" dash to full, suffocating oligarchy has disenfranchised what is clearly the main engine of US economic health.

"Ninety-five percent of economic gains since 2009
have gone to the 1 percent."
Robert Reich [Read the article at his blog: Robert Reich]

All the supply side advantages a sold out Congressman could dream of have been installed now.  Although every whimsy and desire of the oligarch class is now in place, the rich find themselves perplexed as they face an economy which still won't grow.  The moneyed class have cemented every kind of loop hole and advantage  imaginable into the tax code, their wealth continues to increase astronomically but they are worried to despair because the entire remainder of the economy remains motionless on its death bed.

Introducing new taxes -- on them -- may not seem to offer a solution, but, in this case, fact is stranger than fiction.  A surprising number of our billionaire masters are arriving at the same realization.  It's just not much fun to be obscenely rich if you can no longer go outside the gates of your gated community.

There are those -- probably including MeanMesa among them -- who would like to simply raise taxes out of sheer revenge, but the "angry blind folded teenager with an axe" approach is nonsense.  The latest wave of painful, failed Republican "austerity" has shown this.

Instead, we must take the "eyes wide open" approach as we seek out a sequence of parts, policy phases and legislative initiatives which will solve our problem.  One of those parts is as big as a refrigerator and just as unavoidably obvious.

There has never been a more propitious moment for introducing a "transactions tax" on the glacial flow of nearly invisible money flowing through the market.  This post deals exclusively with the shadowy denizens of Wall Street, but a similar case can be made for other spots where "high traffic" dollars are doing their work for the moneyed class.

[MeanMesa asks your indulgence on the blogged graphics for the following article.  What's posted here is the best version of several attempts to copy and paste the "pdf" of the original file.  For a much more readable version, follow the link {http://www.cepr.net/index.php/publications/reports/ftt-revenue}, open the pdf and read it there.  It is three pages long.]

This joint report by CEPR and the Political Economy Research Institute (University of Massachusetts, Amherst) gives an estimate of $177-354 billion in revenue that could be raised by taxing financial transactions in the United States. 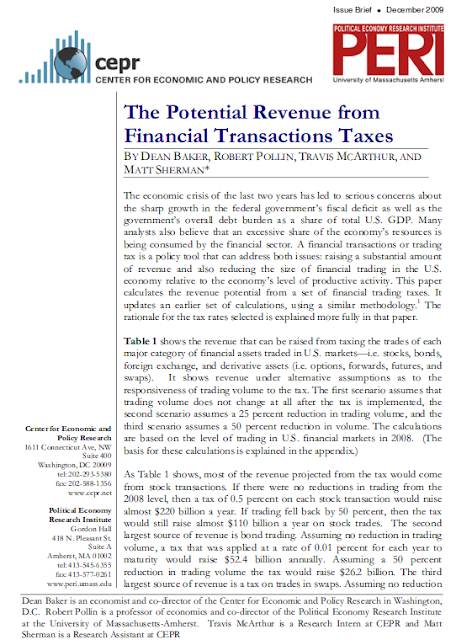 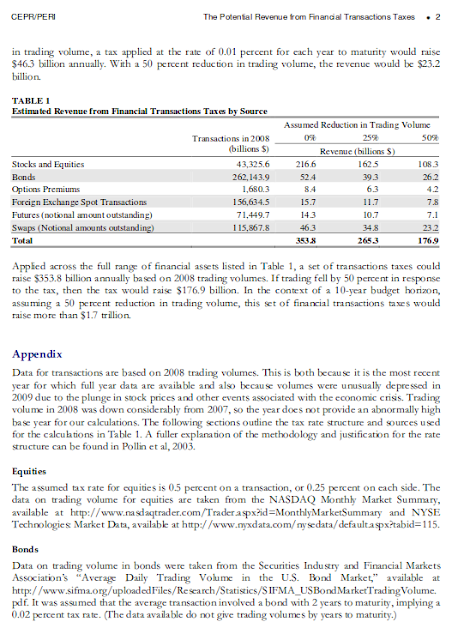 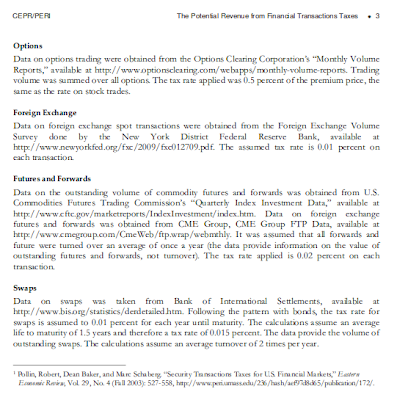 How We Can Do This


First of all, MeanMesa has been here before.
Millisecond Trading: The Ultimate Parasite
Adding a Tapeworm to Cancer Stage Capitalism


Naturally, step one is to elect Democrats to the Congress.  However, those can't be just any Democrats.  With this on the agenda, we must assume that there will be some heavy lifting in our near future.


Try to imagine how billionaires like the Koch brothers or Sheldon Adelson will respond to legislation like this emerging in the House and the Senate.  Try to imagine what instructions Murdoch and Ailes will be getting detailing the FOX "fair and balanced" response.  A whining, voicy horde of soft palm hedge fund managers will be threatening to move the entire stock market to "somewhere friendlier."

While this screaming may be impressive -- or even intimidating, we need only remember that the unavoidable wave of stark reality has simply hit us first.  The same wave will also be arriving on the beaches of the Florida mansions of this plutocratic crowd a few days later.  Elections have consequences.

The oligarchs who survive this outrageous, "death of capitalism," nearly fatal, five minute "nose bleed" should try to relax,  There are more "tax code adjustments" headed their way.