Where This All Began

Now, MeanMesa can completely understand a gracious Short Current Essays visitor's first reluctant impulse when, after seeing the title of this post, he or she confronts this unsettling, inescapable inner question:

"Well, although I might be mildly curious about what the cranky old codger could have written to Representative Pelosi, I'm still not particularly inclined to 'simply swallow' very much more of those disturbing geriatric rantings at this point.  After all, I must still go peacefully to sleep this evening, and I'm convinced that such a restful night's repose will be ever so much more delightful in the absence of the inevitable gastric distress I will unavoidably be suffering -- even then, hours later -- if I have digested too much of MeanMesa's even tempered 'equanimity' during the day."

This admittedly crotchety beginning started with this letter from Minority Leader Pelosi.  The entire thing is scanned into this post for your viewing. 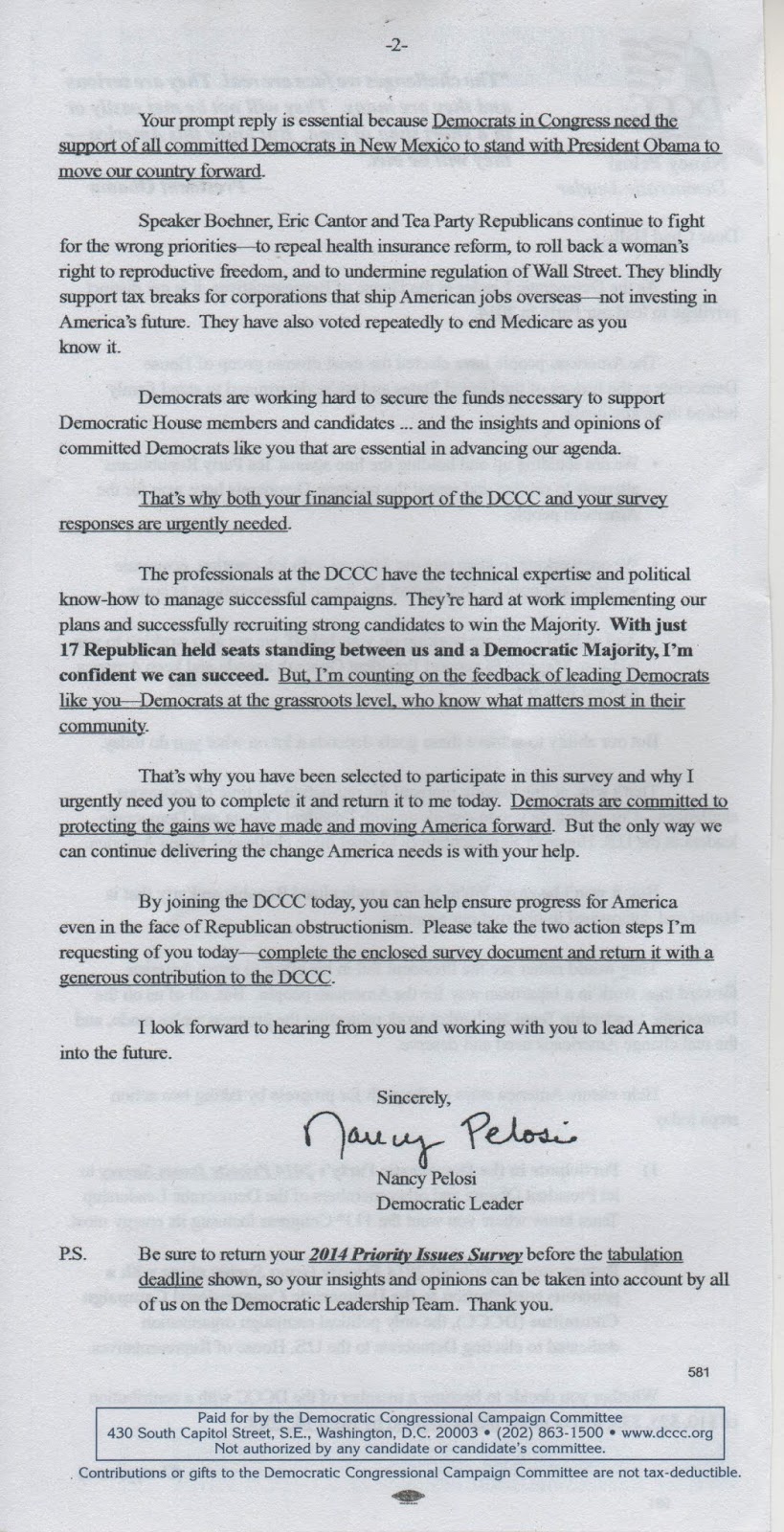 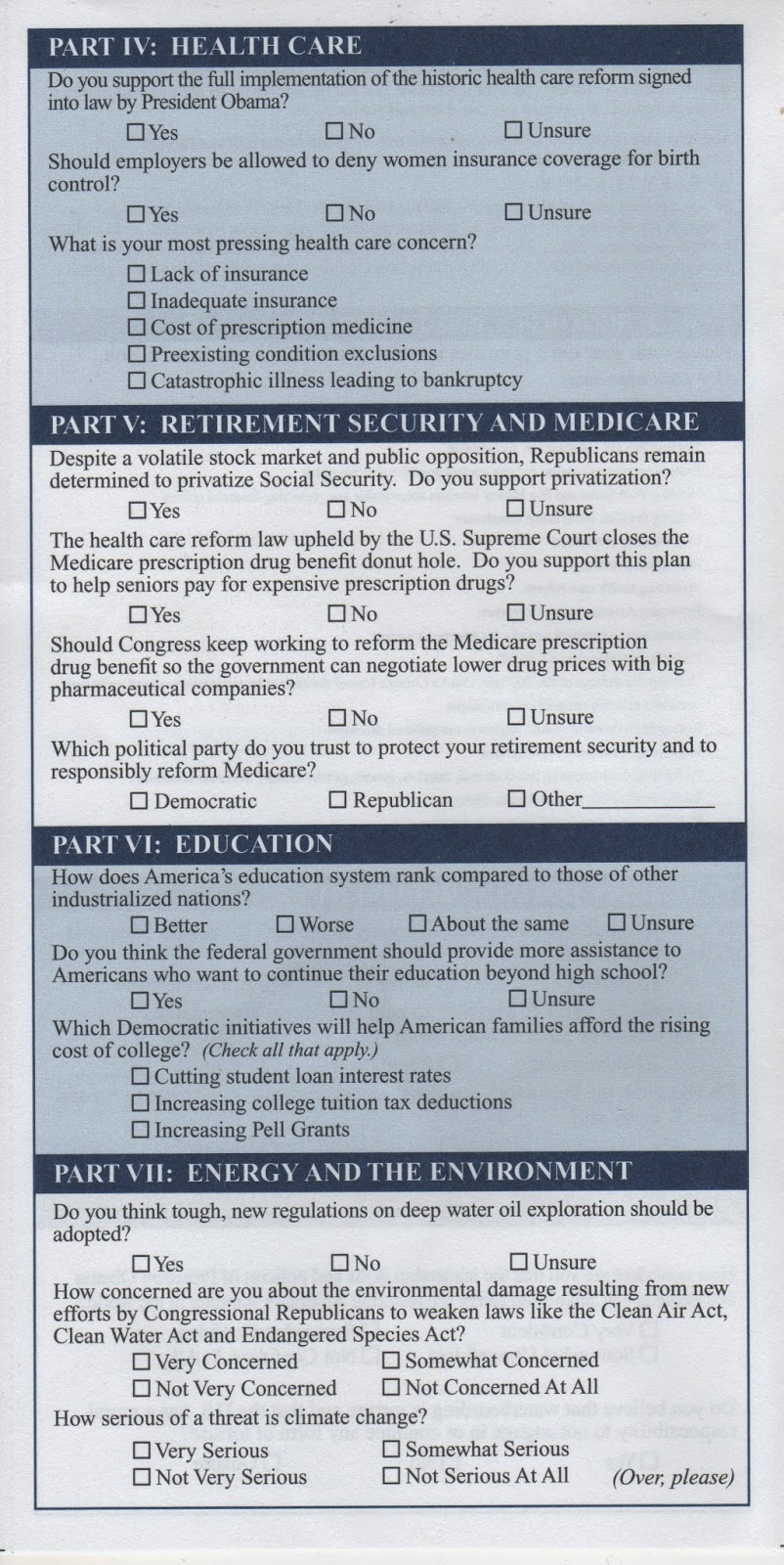 A Quick Note Back to Nancy
No, there won't be a check enclosed.

MeanMesa can tell right away that you would appreciate receiving a "little something" back in the mail in response to your nice form letter.

It is a great sorrow to tell you that even a "little something" is quite beyond the MeanMesa budget.  It's actually been that way for quite a while.  Of course, it might be very tricky to see exactly how much things suck out here beyond the Belt Way, but MeanMesa urges you to just keep trying.  There's ALWAYS hope.

Perusing through the rest of your nice letter, it's also clear that you might like a completely "dyed in the wool" brown shoe Democrat like MeanMesa to "join your effort" to establish a Democratic majority in the House in the 2014 election.

Gosh darn it, anyway.  We did that last time.

However, it's pretty clear that you didn't notice that more Americans voted for Democratic House candidates in that 2012 election than for Republicans.  The reason that MeanMesa is thinking that you must not have noticed is because you have never said anything about it.

"Old school" Democrats like MeanMesa think that little trick should be visiting the GOP's PR money bunkers every day.  Every day.  Every time a Republican wakes up in the morning, he should dread hearing a another Democrat talking about the illicit power scam the oligarchs are pulling with their crooked gerrymandering.  Every morning.

What Boehner, his tea bags and the owners of the Republican Party have done -- and continue to do -- to us out here on Main Street should scare the living daylights out of the whole bunch. They should be cowarding in frantic contrition, hiding under their desks -- hoping that somehow it will end, that maybe no one will notice them.  We can't put them where they belong -- at least not through any mechanism that doesn't involve guns and guillotines.

We -- stupidly -- were counting on you to do that.

Instead, we hear nothing.  Just one wimpy little session of hopeless complaining after another, each one covered with a phony, "brave" little "school boy" smile. That's all we hear -- if we hear anything at all.  Most of the time we hear nothing.

Gee whiz.  All us Democrats out here beyond the beltway have been getting our "feathers ruffled" from have an illegitimate, minority Party in charge of the House of Representatives.  Now, of course, there are all kind of reasons, rules, tricks and the like which "explain" why minority House tea bags are continuing to loot everything that's not bolted down, and we suppose we have to  more or less can live with that.

The part that we can't "live with" is an essentially silent, invisible Democratic Party -- including what's left of a once promising ex-Speaker -- a Democratic Party that isn't raising hell every minute of every day about the remnant of our democracy slowly sliding into the oligarchs' tea party meat grinder.  MeanMesa just guesses that those of us out here beyond the Belt Way simply aren't all that comfortable with a unstable bunch of wild old testament hill billies and bigots running the show.

MeanMesa understands that Democrats slept through the part where the corporate oligarchs took control of the media.  Yes, that's a problem, but it's clear at this point that the Democratic Party  -- instead of solving that problem -- simply surrendered back into their safe Districts to wait for the "cycle" to turn.

Heh, heh.  To wait for the oligarchs to "come to their senses," right?

Here's the latest news, Nancy.  The oligarchs aren't coming "back to their senses."  This isn't merely a little "crazy patch" that's going to get better if we just patiently wait it out.  The owners of the Republican Party are TOTALLY in their senses right now.

This part of the oligarchs' nightmare is TOTALLY on track right now.

Today's Democrats hand an automatic "get out of jail free" card to every tea bag cracker who sticks his foot in his mouth with new biblical "rape laws" which horrify women. New "discrimination laws" are met with a cheer from his drooling, bigoted comrades. New voter suppression schemes, continual "rip offs" of thinly fabricated GOP "austerity," never reduce the deficit.  The crap is endless. The tea bag crackers can just spout this psychotic, hateful stuff day and night, and whenever they're through with the most recent wave of their crap, the frightened Democrats just line up to quietly leave.

You want a Democrat like MeanMesa to "join the fray?"  Well, MeanMesa can't run fast enough to catch up to the recruiting office in your retreating army.  It's not the first time a bunch of spineless whiners have tried to get someone else to come fight for them while they stand behind the line, wringing their hands.  Do you really plan to stand back and watch us "fight" in an army that's been running away from the fight as fast as it can for years?

We're totally ready for the scrap, but we won't be going unless we'll be fighting along side Democrats who actually have blood in their veins.

The only recognizable Democrat MeanMesa has seen lately is Joe Biden.

When Joe Biden talks, HE talks about Republicans.