Of course, there is the natural aura of dreadful anticipation surrounding the inevitable spat which will suddenly lurching itself onto the Thanksgiving table. Weird Uncle Billy, still recovering from the night before at the American Legion beer hall, will inevitably latch onto some otherwise innocent, casual remark from someone at the table, interpreting it as a open opportunity to begin another repetition one of his already road weary FOX "news" lectures on the outrage and danger of Obama Care, the IRS or Benghazi.

Although Uncle Billy, all juiced up with what he heard on his car radio during the trip to Thanksgiving dinner, has been convinced that his opinions ["everybody knows..."] are either "those of a clear majority" or some sort of evidence of his "long suffering patriotism," he is actually nothing more than a loud mouthed outlier. He's been fed hourly doses of twisted facts for years, and -- sometime around 1994 -- he quietly began believing them.

Well, turn that frown upside down! You are not alone! Here's a little audio comedy which will help lift your spirits. Listening to this will strengthen your resolve to make another try at the suggestion which follows in this post, that is, caringly ushering Uncle Billy back to reality.

The Uncle Bill story may seem like fantasy to some of us, but to others, it represents an relentlessly unpleasant and frustrating recurring nightmare. Further, "Uncle Bill" might be an actual uncle, but his equivalent could also manifest as all sorts of other people we encounter in our daily lives -- someone at the office, a blow hard neighbor or someone in a check out line. MeanMesa, wearing an old Obama-Biden tee shirt from the 2008 election campaign, was accosted by a butcher at the neighborhood farmer's market grocery.


If you're not intimidated by these over zealous mouth breathers, you'll need to get ready for those unavoidable moments when they decide to tell you "how it is." This post will set you up with what you'll need.


When we face facts, as opposed to stumbling around mindlessly inebriated by "non-news" television, we must acknowledge that perhaps as many as 30 % of US voters continue to consider the right wing's artificial think tank media stream more or less credible. The oligarchs' plan unquestionably incorporated this aspect of "non-symmetric" propaganda promotion in their larger scheme to permanently divide the country's electorate.

One of the most common forms of these irritating attacks may not even focus on any particular topic, but rather be blindly driven by what is called "Obama-phobia." In these cases there is little likelihood that the conversation will get far beyond raw right wing racism with a few of the "easier to recall" wing nut talking points interposed here and there. These, generally, have some tenuous, talking point connection to three areas of government policy.

These seem to be the primary subjects which the right wingers have heard the most frequently repeated complaints about from their media outlets. The frenetic Benghazi, IRS and Obama Care scandals ignominiously "died on the vine" public opinion-wise before garnering any political traction -- primarily because they were each too complicated for the GOP's educationally challenged base to handle in one of their abnormal, breathless "spontaneous conversations."

Because these deceptive "media lines" have been roaming around our country's "free press" -- unhampered by any contradictory, factual reality -- long enough to foment this current synthetic political meme, MeanMesa is anxious to do what's possible to equip visitors with information they need to set things straight. So, let's get to work.


MeanMesa ran across the Daily KOS article with these great graphic charts which happen to directly address the three areas of right wing propaganda mentioned above. To start, we need to take a close look at the data they present. This article is excerpted here, but the original is worth reading. Enjoy. [All links from the original article remain enabled.]

Problem: Your right-wing brother-in-law is plugged into the FOX-Limbaugh lie machine, and keeps sending you emails about "Obama spending" and "Obama deficits" and how the "stimulus" just made things worse.

Solution: Here are three "reality-based" charts to send to him. These charts show what actually happened. 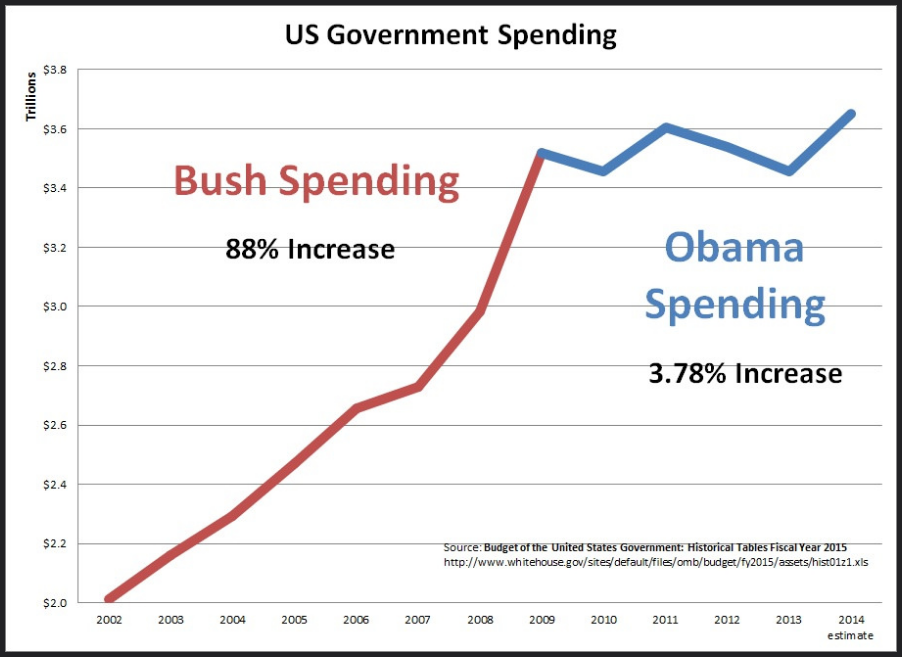 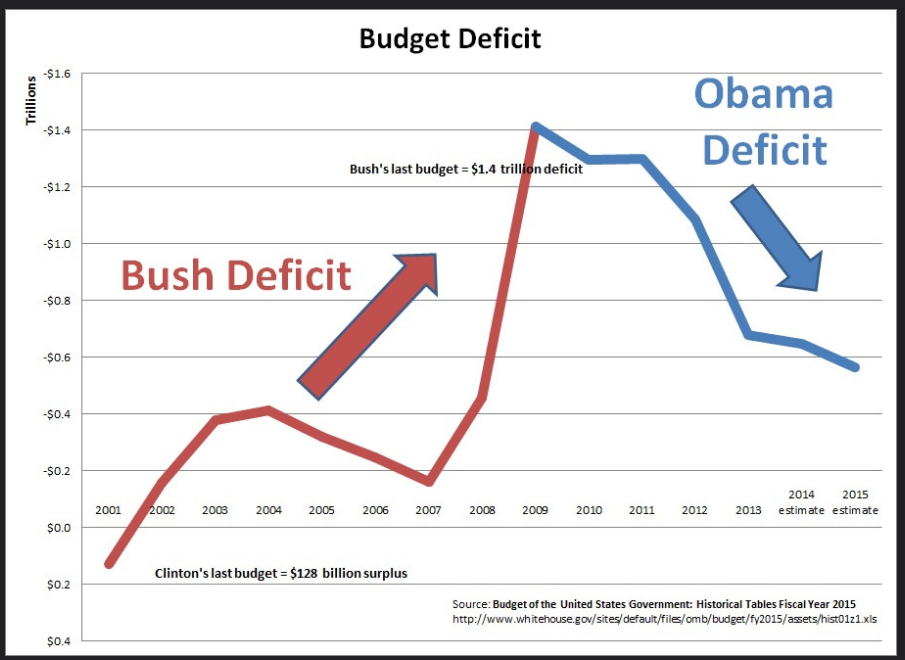 Note that this chart starts with Clinton's last budget year for comparison.


The numbers in these two charts come from Budget of the United States Government: Historical Tables Fiscal Year 2015. They are just the amounts that the government spent and borrowed, period, Anyone can go look them up. People who claim that Obama "tripled the deficit" or increased it or anything of the sort are either misled or are trying to mislead. President Obama inherited a budget deficit of $1.4 trillion from President Bush's last budget year and annual budget deficits have gone down dramatically since.

The Stimulus and Jobs 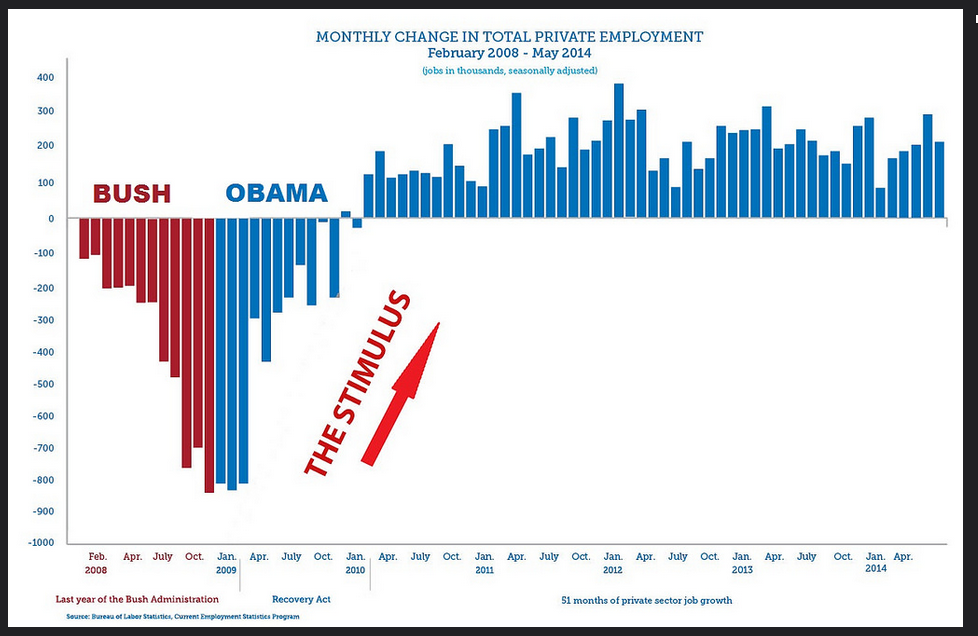 In this chart, the RED lines on the left side – the ones that keep doing DOWN – show what happened to jobs under the policies of Bush and the Republicans. We were losing lots and lots of jobs every month, and it was getting worse and worse. The BLUE lines – the ones that just go UP – show what happened to jobs when the stimulus was in effect. We stopped losing jobs and started gaining jobs, and it was getting better and better.

The leveling off on the right side of the chart shows what happened as the stimulus started to wind down: job creation leveled off at too low a level.

Conclusion: THE STIMULUS WORKED BUT WAS NOT ENOUGH!

These are just three of the false things that everyone "knows" because places like Fox News repeat them over and over and over. Some others are (click through): Obama bailed out the banks, businesses will hire if they get tax cuts, health care reform cost $1 trillion, Social Security is a Ponzi Scheme or is "going broke", tax cuts grow the economy, government spending "takes money out of the economy."

Actually This Reduced Spending And Lower Deficit Have Hurt The Economy

Government spending is literally, by definition, the things that government does to make our lives better. People have been tricked into thinking that government spending is somehow bad. The billionaires and giant corporations spread this nonsense around because they are greedy and just want their taxes lower. The top income tax rate used to be more than 90 percent and the top corporate tax rate used to be more than 50 percent. That was back when we built this country's great infrastructure, had good schools and defended the world against the Soviet Union. We also had higher economic growth and a growing middle class.

Government spending does not "take money out of the economy." In fact it puts money into the economy, creates jobs and lays the foundation for future prosperity. The decline in government spending shown in the charts above is the reason that the economy remains sluggish and jobs are still hard to get. Just look at that chart showing what the stimulus spending did for the job situation. But since the stimulus ended, Republicans have obstructed every effort to continue to use our government to help our economy.


Putting the Plan Into Action


Now, clearly, rattling off volumes of figures to one of these already gravely confused "propaganda victims" will probably not be all that effective. After all, they are accustomed to "absorbing" think tank talking points which have been "pre-digested" into such a state as to be pablum an infant could swallow without choking. Still, somewhere down in that mindless, hate filled "fellow citizen" there remains a potentially functional human.

This suggests that if we could just hand him something tangible that he might take home to "look at later," there is the possibility that he might consider some of the facts. Try to think of it as leaving an AA pamphlet on the coffee table of a still drunk alcoholic. 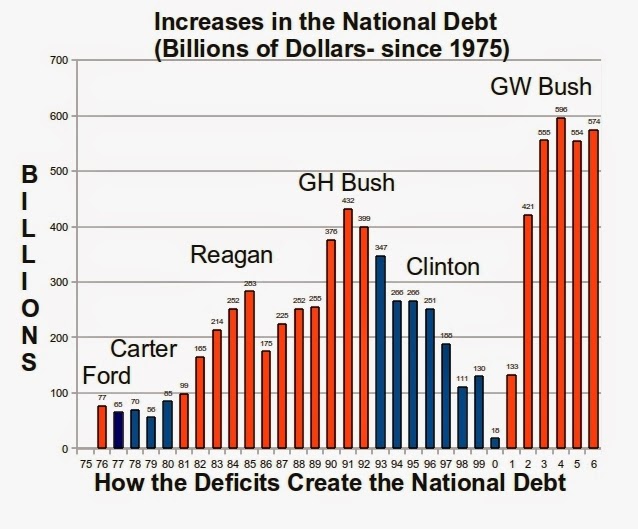 Some years ago MeanMesa prepared this "business card sized" graphic concerning the increases to the national debt occurring under various Presidents. It was handy because it could be reproduced on a computer printer, cut up with scissors and handed to these mouthy throwbacks.

At the time it directly contradicted reactionary "fact twisted" accounts of how bad Bill Clinton had been as President.

At first these were prepared individually, but after the idea caught on a little, all sorts of folks wanted a few that they, too, could hand out to argumentative Republicans. To provide these, the individual card image was "ganged" into an 8 1/2" by 11" format for "mass" printing. 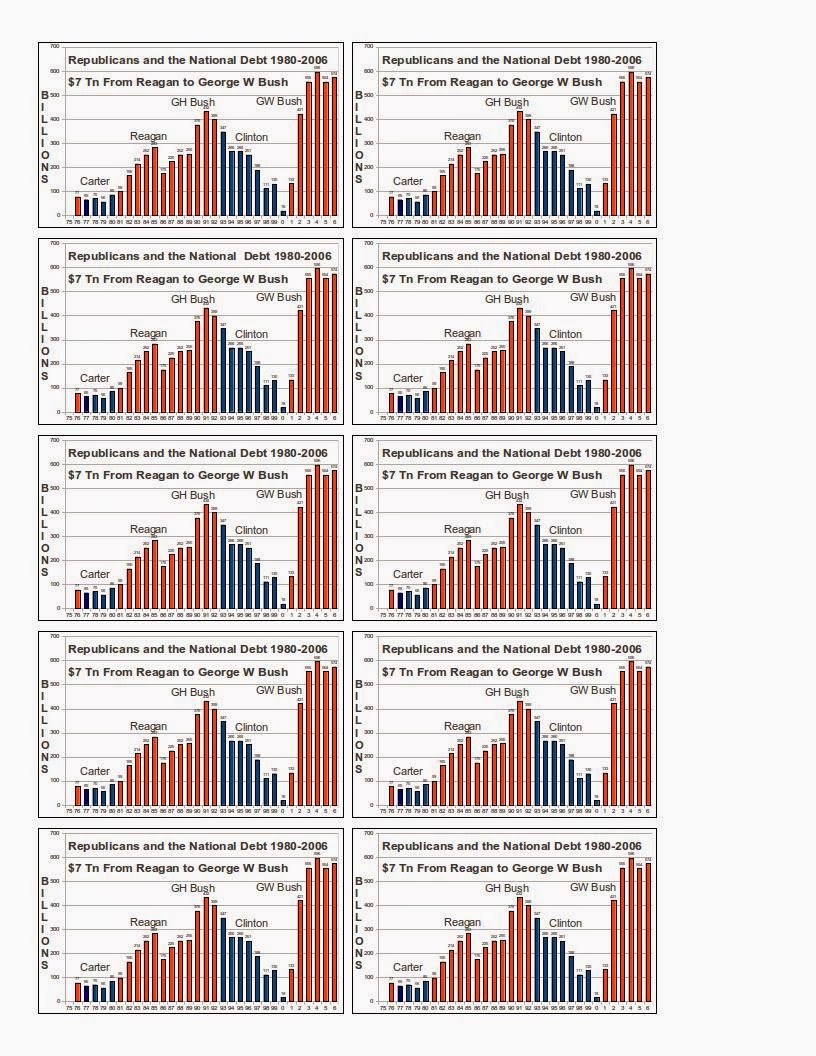 Cutting these sheets into individual "business cards" took a few minutes, but the results were fantastic!

To get started you'll need to purchase a ream of card stock. This contains 500 sheets of printer compatible card stock, so you'll have plenty to make a few cards containing all sorts of different "messages." The card stock here at Galactic HeadQuarters is 110 pound, and cost around $8. The 500 sheet ream has lasted for years -- through a couple of Presidential elections and a few other things.

MeanMesa has ganged the charts from Daily KOS in the same manner, converted them into blogger friendly ".jpegs," and posted them here on the blog for your convenience.

You can copy them as you read this post, paste them onto your "drawing" part of your office program and print away. You may need to adjust the size to make sure it is going to print a nice spread on a full sheet of card stock. 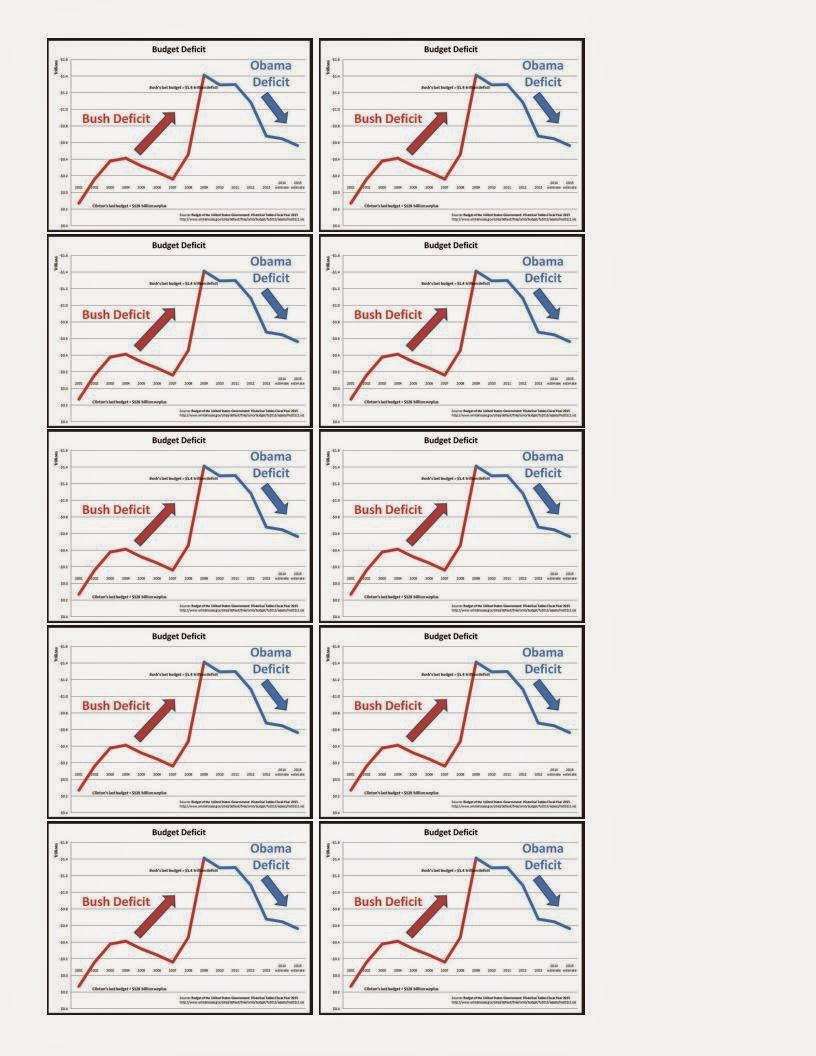 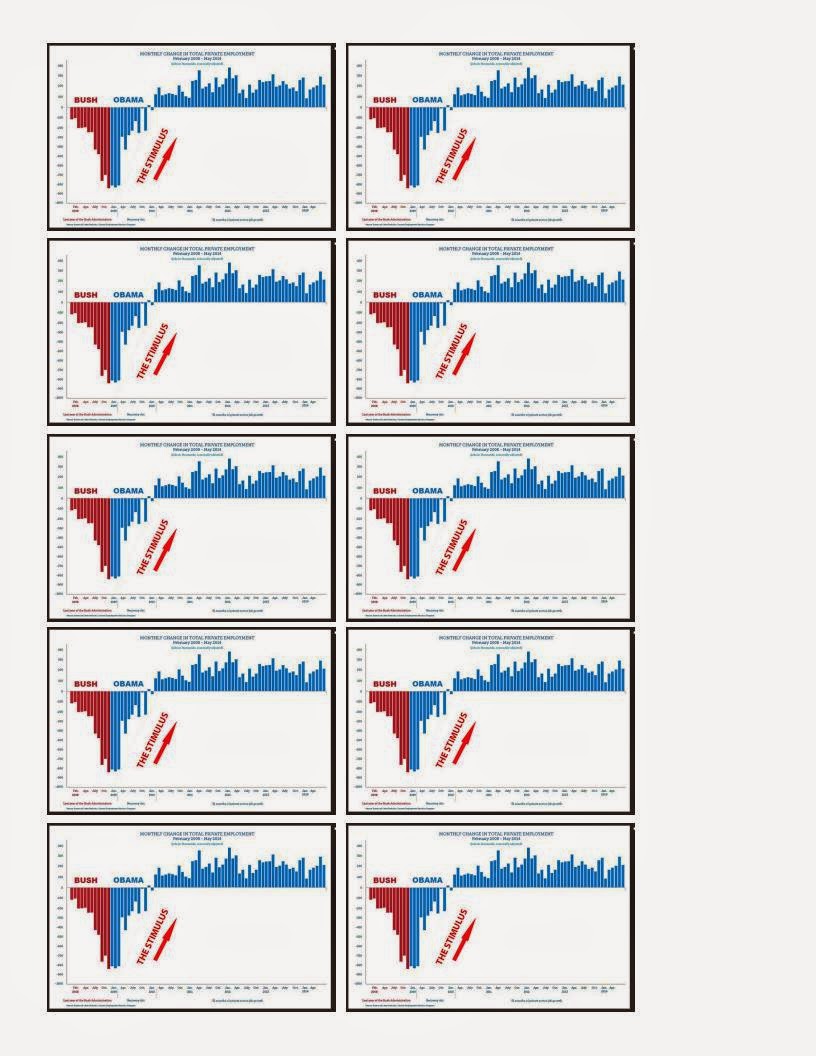 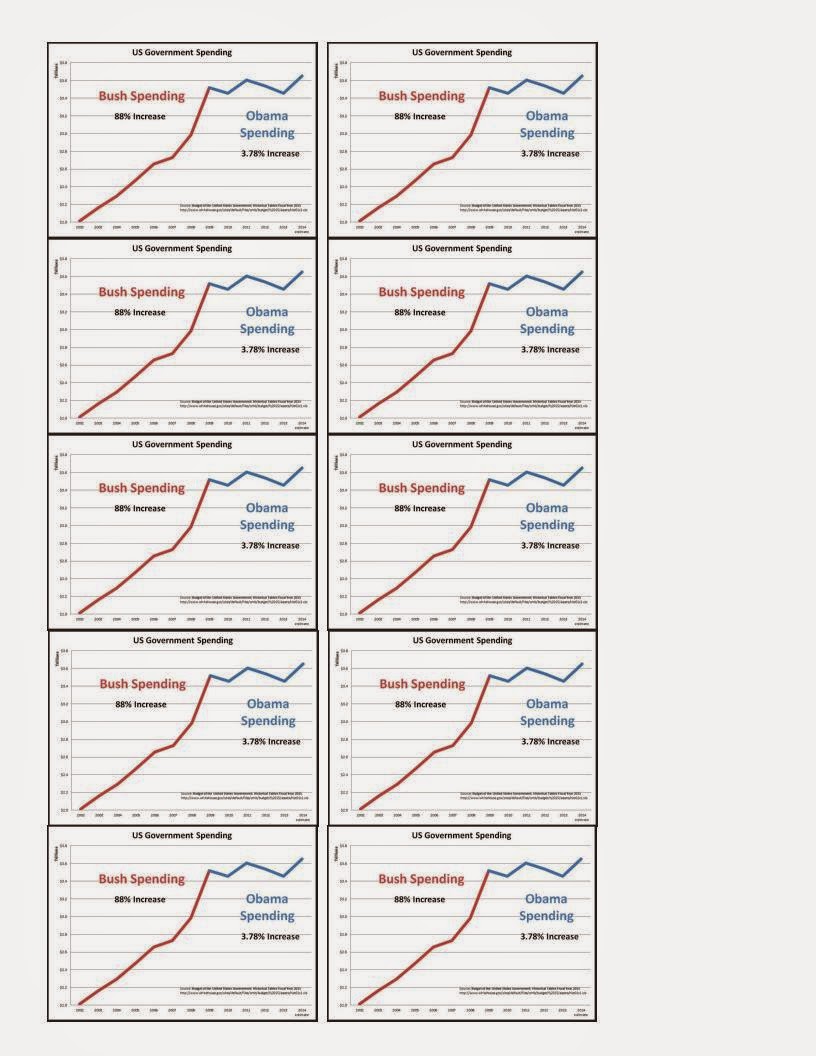 So, get out your scissors, stay inside the lines and get to it!
Posted by Chad H at 9:41 PM