MeanMesa: Waiting for the Mail

Communicating with Washington, D.C.
Your Representative or Senator is simply dying to hear from you.


Amid the wonders of our modern, technological age there are all sorts of extremely convenient tools to convey our opinions and sentiments to our elected officials. Among the least effective are things such as petitions filled out by faceBook stragglers who add their email addresses to some little, easily ignored message which is then converted to electrons and piped off to Washington. When such a petition arrives in a Capital Hill mail room [email room?] a tiny little check is placed on an already on-going list of "constituent interest topics."

In this way hundreds of petition signing emails are aggregated into a solitary total, and should that total exceed a certain threshold [a threshold inevitably set by a Congressional 'office manager' who is famously adept at preventing anything upsetting from reaching the Congressman or Senator...], a very, very short mention is then made to the Congressman or Senator about this particular concern. Otherwise, that is, should the petition not reach this threshold of "valid perturbability," nothing further happens, and all the electrons involved are released for use in their next communication task.

Well, MeanMesa has, from time to time, done all these things to communicate this or that message to the seat of power in Washington, D.C. Expectations that such a message might actually deliver any noticeable impact on its addressee were never particularly strong. From time to time the overly emotional phone call might yield a few moments of fleeting satisfaction afterwards, but the artificial nature of such a sensation soon reduces the whole matter back to little more than pointless chatter.

Once all these "less than effective" choices have been dispatched as being too easily ignored, there remains one final option. MeanMesa reserves this last remaining style of communication for exceptional cases. Think of it as the equivalent of a "nuclear option."

This last choice is a letter.

By letter, MeanMesa is referring to an actual letter. One which can be composed on one's computer and then printed out on one's printer. The additional ingredients for this "letter" will be an envelope and a stamp. After all the components have been assembled, the letter signed and the envelope carefully licked and sealed, the whole shebang goes into a mailbox. The United States Postal Service will then deliver this paper envelope containing this paper letter with MeanMesa's actual signature to the Congressman or Senator's office.

MeanMesa found this "nuclear option" quite necessary on two occasions this past week. This necessity resulted in such a paper letter being sent to each of New Mexico's theoretically Democratic U.S. Senators.

Topic: Voting against an amendment proposed by Senator Elizabeth Warren which would have protected the Dodd-Frank bill. 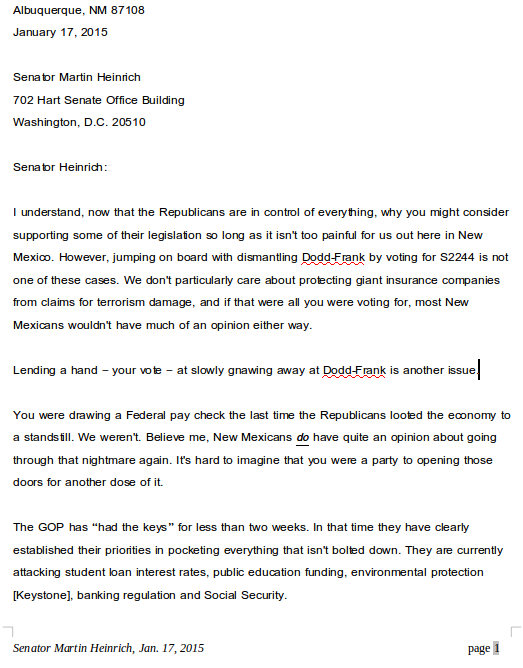 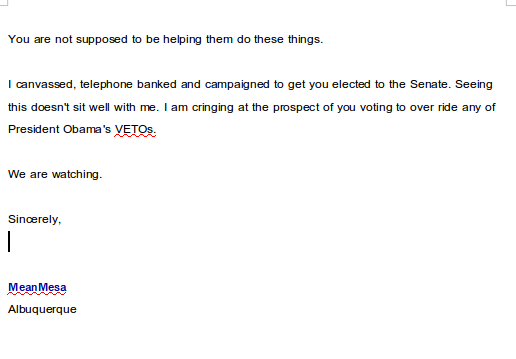 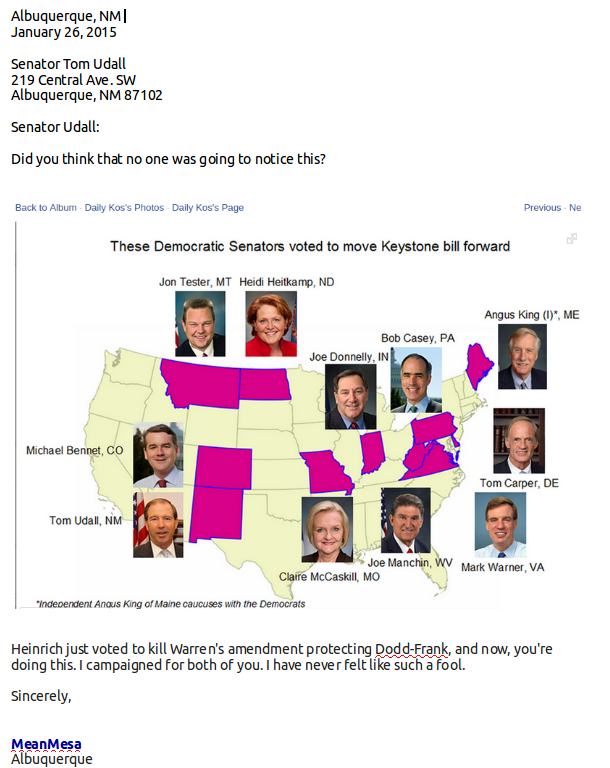 The Options: Sell Out or Scorched Earth?


What will it take to satisfy


what's left of NM's Democratic base?

Now, visitors here, after having a look at MeanMesa's paper letters, may quite accurately get a sense of how incredibly frustrated a progressive Democrat might be when Senators begin acting this way. What can we be thinking as we sit here thousands of miles from Washington, D.C. wondering just what these Democratic Senators of ours are actually doing?

The owners of the Republican Party are busily putting together their looting plan to raise the national debt by $1.25 Tn in the next 24 months. We all know who will be putting this money into their pockets. [The $1.25 Tn/year figure is based on the average increase in debt per year that Republicans -- i.e. Bush W. -- have hollowed out of the economy every time they have had the chance in recent years.] If either Martin Heinrich or Tom Udall think that this is somehow going to be good for New Mexico, we've got the wrong Senators.

New Mexico took a "direct hit" when Bush W. and his cronies in the autocracy vaporized forty per cent of the accumulated wealth of middle class Americans in a matter of a few weeks. Some of the bitter drama unfolding after the "bank job" didn't actually slam into this poor state for a couple of months because we were already so poor that no one noticed much of the impact right away.

Nonetheless, the pain reached New Mexico just as it had reached the other states. When the Democrats took measures to prevent the same thing from happening to us again, most folks here -- from both Parties -- thought that it was a great idea.

Predictably, the banksters didn't like Dodd-Frank much, but MeanMesa suspects that much of the maudlin enmity they expressed was only a guise covering the "cold echoes of real terror" coursing around in their exceptionally small, wicked little brains. They terrified themselves with their own wild greed binge, and although the financial sector's "masters of the universe" squawked and piddled on cue, they were actually relieved that someone had stepped in to permanently squelch the destructive rampage.

That was then. This is now.

It's 2015. Who can remember what happened in 2008? Exactly the same players who looted it last time are now scheming to loot it the next time. [With, perhaps, a few "new faces." The 2008 disaster created a disturbing handful of new billionaires with shiny new, dynastic fortunes cleverly extracted from everyone else's pain.] With the pirates in charge of the Congress, the "next time" is, of course, now.

But, returning to this post, why did Senator Heinrich vote to eat away the protections of the Dodd-Frank? Surely he is not one of the mind addled GOP base who has, following orders, strangely forgotten about what happened to us only a short six years ago. The question is:

"Why did a Democratic New Mexico Senator not vote to protect Dodd-Frank??

New Mexico doesn't need the Keystone pipeline for any compelling state interest that MeanMesa can possibly put together. State revenues are already in a crisis thanks to the low oil prices. As the fifth largest holder of "proven reserves" of crude oil and natural gas, New Mexico receives a very large portion of its state revenue from severance taxes. When the prices of those commodities plummets, state expenditures have to be trimmed to balance the budget.

If anything, the Keystone pipeline inflicts a "double injury" of New Mexico's already rather "battered" economy. [New Mexico is currently having a "second helping" of the Great Republican Recession of 2008.]First, by introducing even more crude oil into the commodity market, prices can drop even lower and state severance revenues will follow the plunge. Second, the Keystone's Canadian sludge is going to be directed to refineries which are now producing gasoline for the New Mexico market, making it necessary for in state gasoline supplies to be refined elsewhere and shipped here.

The Keystone may amount to a "wedding gift" to pay back the Koch brothers who bank rolled the Republican "win" in the mid terms, but it amounts a healthy dose of rat poison for the struggling New Mexico consumer economy. [New Mexico is the poorest state in the nation.]

[MeanMesa was so upset while preparing the paper letter to Senator Udall that it was accidentally addressed to his brother, Mark Udall. For visitors not living in the Southwest United States, Mark Udall lost his Senate seat to a screaming right wing abortion monkey in Colorado in the last election, so perhaps the error was actually prescient. The brothers are the sons of the late Mo Udall. Even before that, the Udalls were a more or less permanent, generational fixture in neighboring Arizona's state government.]

However, bringing the focus back to the title of this posting, all of these protestations only amount to little more than the casual whining one might over hear at a frozen, wind blown, Albuquerque bus stop. The question is:

"Why did a Democratic New Mexico Senator vote for the Keystone pipeline??"

Waiting for the Mail


Do we think we'll be hearing from either one of them?


At least one of the possible answers to either of the two questions above spells big trouble for New Mexico. Is it possible that both of our United States Senators have drunk the Kool Aid while we weren't watching?

If either one or both of them have quietly sold us out, they will have plenty of company in the Congress where just about everyone has now already done the same. After all, we already knew that even after the billionaires ponied up the $500 million to buy the mid term, they still had plenty of dough left over to "talk" to Democrats.

However, rather than recklessly launching into accusations, we should wait for both Senator Heinrich and Senator Udall to explain themselves. If either of these Senators bothers to respond to MeanMesa, that response will be published here.

If there is no explanation or response, maybe Washington will have a chance to understand the "Mean" part of MeanMesa.

A promise was made in the post above -- to update with correspondence from either of the two Senators. This email arrived from Senator Tom Udall's office.

Dear MeanMesa,The United States has always been one of the most innovative economies in the world. We invented the telephone and perfected the assembly line. American ingenuity put the first man on the moon. And I believe we can lead the world in clean energy production.But the debate over the Keystone Pipeline is a political distraction.America deserves a “do it all, do it right” approach to energy policy that will move us forward by investing in homegrown, energy solutions -- like clean energy technology and domestic oil and gas. But instead, the Keystone Pipeline would pump millions of gallons of dirty tar sand oil through the heartland of our country.Tell the Senate you support American renewable energy alternatives to dirty foreign oil pipelines. Add your name to my petition.Climate change exists, and it’s already impacting America’s communities and our economy -- just ask our farmers and ranchers here in New Mexico.This pipeline is not a real, long-term energy solution. We have the technology, resources, and know-how to lead the world in clean energy production that will create jobs and fight climate change.The Keystone Pipeline is a step back when we should be moving forward. Add your voice to mine and oppose the Keystone Pipeline.Thank you for your support.Tom

Additional correspondence will be published here.