Where Do You Go
When You've Gone Too Far?
Thinning the Clown Car's "herd"


One might think that anyone with "hopeful" ambitions for landing the famously elusive Republican nomination for President might avoid at least a few of the more notorious "hash tags" which have brought previous "hopefuls" into the GOP's "ash can of political history." Astonishingly, this turns out to not be the case with "Carly the Brave."

Dispatching all fear of public opinion backlash, she has assembled every scrap of the scant remaining debris possible of the "previously discarded planks" for the haphazard construction of her "political image." Granted, the already impressively ponderous "junk yard" of GOP road weary talking points has begun to "turn" in the summer heat as we approach the Republican "clown car debates," but Carly still stumbles ahead, unshaken, through one heavily scripted "soft ball" interview after another.

She hasn't so much as broken a sweat while wasting no time at all disregarding any opinion poll not originating the bowels of FOX News. Still, there are more than a few embarrassingly "tufts of reality" unavoidably landing on the hood of her Bentley like pigeon droppings. For example, lots of the folks comprising the zombie-like GOP base really have very little appetite for massive layoffs and massive outsourcing of American jobs [estimated at around 30,000] to eager, low labor rate spots scattered around the Third World.

Naturally, MeanMesa's enduring fixation with "interpretive fiction" is drawn to this situation like moths to the patio candle. While there is little possibility of ever penetrating the layers of obfuscation protecting the inner workings of the GOP billionaires' K Street think tankers, we can still fall back to the prospect of tastefully indulging ourselves in a bit of "quietly imagining" a brief glimpse of Ms. Fiorina's actual dealings with her lobbyist handlers.

What could possibly be more well deserved recompense -- gerechte strafe -- for Ms. Fiorina than to see her shockingly inauthentic candidacy being brutally outsourced to save a few dollars?

Let's take a look at what her termination letter might possibly contain.


A MeanMesa Fiction
The Letter 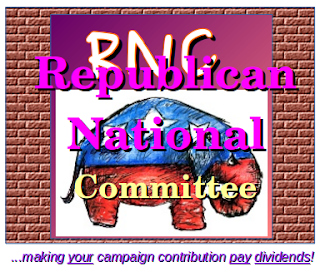 
I regret to inform you that effective immediately please consider our contract terminated. This office received additional direction from several of our major RNC contributors expressing a growing uneasiness with cost to benefit calculations concerning your Presidential Campaign.

In response to these contributor concerns the K Street RNC offices will issue no further cash advances for payment of your campaign expenses. You will also be expected to establish alternate arrangements for making the lease payments for your campaign headquarters.

I want to personally thank you in behalf of the RNC sponsors most responsible for financing your entry into the Presidential nomination contests. The Candidate Management Group had concluded early in the process that both a token female and a token black candidate were necessary additions to our Party's new "big tent" campaign and candidate imaging strategy.

Although both of these marketing "landmarks" remain as priorities for our Party, it has been decided that your individual candidacy carried with it certain significant costs which could not be reconciled with your extremely low approval ratings among Republican voters and the very low probability of your campaign's success should you be nominated. We suspect that a good deal of your negative press is originating from disgruntled previous employees at Hewlitt Packard which you fired during corporate out sourcing.

However, be assured that we at Candidate Management Group have not abandoned the value of the fundamental concept of including both a woman and a black in our primary field.

In fact the Candidate Management Group's HR representative has identified a number of attractive candidates to fill your position now that you will be withdrawing from the race. One candidate in particular is especially impressive. Ironically, HR located her in a Vietnam brothel near the very factory compound where outsourced Hewlitt Packard products are being manufactured right now!

Of course, thanks to both advantages in the international exchange rate and additional cost savings available in local prevailing labor rates, this new candidate offers very substantial reductions in cost compared to estimates of your own campaign's projections. We find the additional benefit deriving from leveraging this nominee candidate's very uncertain immigration status to also be quite appealing, and expect her, if she is selected, to be both quite eager and also very successfully manipulable in conducting Candidate Management Groups' "operational priorities" during the election.

We would like very much for you to consider training this replacement in some of the campaign fundamentals you have employed during your own candidacy. Again, eliminating the costs associated with retraining her here at Candidate Management Group's facility offers an attractive additional savings to our sponsoring contributors.

Thank you again for your work with the Republican Party, and I hope to hear from you soon regarding your decision to provide training for your replacement candidate. I will take this opportunity to caution you to strictly adhere to the provisions in all aspects of our non-disclosure agreement which remains in full effect even though our campaign association has been terminated.