Medicare's Troubled Youth
If it had been anyone besides Lyndon Johnson,
the billionaire Wall Street hyenas
would have eaten it alive in the first week.


The "young life" of Medicare in contemporary American politics is a strange one, indeed. The program, when it was first implemented, had a stellar adolescence in a thriving economy with plenty of benefactors who were, frankly, astonished with the possibility of actually qualifying for health care. Of course there were, lurking in the shadows of an equally fledgling oligarchy, also "detractors." 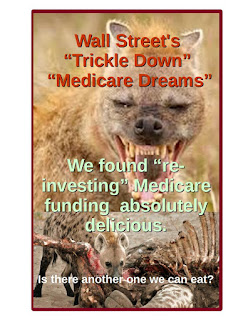 In these early days, most of the "detractors" were not really interested in the ideological struggle particularly, but they were interested in absconding with the program's budget and diverting the sizable Federal expense into "economic incentives" to "promote economic growth," "lower tax rates in general while also creating even more really great tax cuts" to "promote economic growth," and lend whatever "assistance" could be offered to health care and health insurance lobbyists in return for certain "campaign contribution" favors in return.

In fact, in no time at all, these ever so sincere, fiscally concerned oligarchs were predicting that the program's cost would completely consume the budget allocated from the Social Security Trust and leave the nation's economy saddled with a bunch of expensive old people who weren't dying "on schedule" as dependably as they did in the "good old days." Even more irritating, if the program survives all their attempts to scuttle it, ALORS!! tax payers who don't even have lobbyists will be getting benefits from the US government!

These grumpy billionaires, watching vast General Fund cash slipping beyond their traditional "grasp" into Medicare coffers, at once proposed that the money for Medicare would have to be channeled into the Wall Street markets if it were to generate a sufficient revenue to sustain the program. To a man, literally clutches of these "civic minded" plutocrats pledged to do everything in their power to "help" make this "economy saving re-location" a fait accompli just as quickly as possible.

Although they were already quite busy managing their own dynastic fortunes, they were still suspiciously willing to take a few minutes from their busy schedules to make certain that the "re-location" of all these misplaced, low yield funds was done, well, just splendidly.

At this juncture a "trickle down fan" would have imagined that he'd died and gone to heaven. Lyndon Baines Johnson could be an extremely difficult man. Happily, however, in those days "gnawing" away at one of Lyndon's favorite projects was not a wise move -- even for a hyena.

Medicare: Fast Forward to 2015
Oligarchs are genetically unable to change their stripes.

OF COURSE the oligarchs are still obsessed with privatizing Medicare -- probably as a "prelude" to privatizing Social Security as well. Not a single day has passed since Medicare became law in 1966 during which the hedgies, brokers, billionaires and banksters have not indulged in a delirious afternoon "pipe dream" in which the millions of dollars worth of right wing propaganda they have purchased finally hits "pay dirt," and the entire Medicare budget is "invested" in their markets.

They've already managed to scare the day lights out of millions of seniors with their phony claim that the entire Social Security System -- including Medicare -- is nearly bankrupt. It's not nice to scare old people so you can steal their retirement insurance.

Right here, however, we need to "change the course" on this ranting and raving.

During what passed for a "debate" on the ACA [ObamaCare] there were murmurings about cutting out the parasitic HMOs [Heal Maintenance Organizations] such as the little non-profit, corporate stinker MeanMesa uses. These HMOs "administer" the Medicare program -- mainly for old people -- while "pocketing" around 15% of the "take." Further, to justify taking their corporate "cut" from the program, these HMOs claim to be enhancing the benefits which one of their "members" would have received if only covered by straight old, regular Medicare.

Whether or not such claims are actually true, the "official line" issued from these HMOs is that "doctors simply won't see patients if all the coverage they have is Medicare." MeanMesa's HMO, for example, offers the infamous "Silver Sneakers" senior exercise program at no extra cost. However, more immediately necessary costs such as eye glasses and dental work are not covered.

Well, these pesky "cost cutting" HMOs do some painfully interesting things with their Part D Prescription coverage and a few other things, but this post is about another, separate feature of the "cost controlled" Medicare coverage they administer. HMOs get to regulate co-pays.

Under this plan MeanMesa is able to visit a quite competent PCP -- a general practitioner serving as a Primary Care Provider -- for a $5 co-pay. Although that cost is certainly reasonable enough, this is exactly where this particular problem begins.

That PCP "refers" a Medicare patient such as MeanMesa to "specialists." This type of referral is not something which occurs sporadically or even infrequently. It occurs every time absolutely any kind of problem not included in this PCP's list of "treatable issues" is revealed during one of these $5 co-pay office visits.

Worse, anyone MeanMesa's age is almost certain to be referred to one specialist after another -- each appointment having a $50 co-pay. The difficulty arises from the fact that MeanMesa lives on a very modest fixed income -- primarily Social Security, and Social Security checks do not have much room for very many $50 co-pays at all. This places a question before a Medicare patient such as MeanMesa.

It won't be possible to see all these specialists at $50 a visit, so it then becomes necessary to "sort out" which ones are treating something which is actually worth $50 and which ones aren't. The PCP is not really allowed by the HMO to "prioritize" the specialist referrals he is issuing, and -- although MeanMesa is many things -- MeanMesa is not a doctor.

So, if a patient such as MeanMesa wants to separate "the wheat from the chaff" with respect to which specialist referrals are most important and least important, it becomes, well, a crap shoot.

That leaves an old codger with his GOOGLE.

The corporate health providing industry complained mightily about the Federal regulations which entered the picture with the passage of Medicare. However, all the "hub-bub" and whining which accompanied Medicare pales when compared to the screaming which surfaced when the ACA was first enacted -- and, as the wild hopes of the bill's ultimate destruction continually surged, the screams of the health insurance lobbyists were amplified to an even higher pitch each time the ACA was challenged in court.

With respect to Medicare the block of initial regulation which was part of the original legislation settled in the daily practices of providers. However, quite predictably, every effort has been made to subvert those original regulations. This nation spends $6 Tn annually for health care, and the corporate industries consider the task of constantly seeking out "edges" for more profits an unavoidable "right of passage."

Not even a single tablet of aspirin or a Chinese made band aid is too cheap to escape this unending "profit scrutiny." The upward creep of co-payment rates should surprise no one who is familiar with the Medicare system, but at a certain point the system simply out prices the population it was originally intended to serve.

The grotesque, constant presence of questions of coverage reveals -- every day -- the unworkable awkwardness of the corporate influence. A call for an appointment with a Medicare HMO doctor asks "What kind of insurance to you have?" before asking "Why do you want to see the doctor?"