There is an "October" Every Year
The "surprise" part gets added
if there also happens to be an election underway.

MeanMesa is always watching -- even when an election cycle has just begun -- for hints of the corresponding "October Surprise" which might materialize months from now in the heat of the final days of the competing campaigns. This concern is more than a "passing moment of faux-drama" to full the lazy ennui of an otherwise delightful August afternoon in the Land of Enchantment.

This view could be justly regarded as geriatric cynicism if MeanMesa hadn't seen the same pattern so many times before: Iran hostages [1981], ENRON [2001], war in Georgia [2008], Gulf of Tonkin [1964], end of Vietnam War [1968], Iran-Contra [1992], bin Laden and Bush [2004] and others. In each case the consequences of the "October Surprise" -- whatever it happened to be in that particular election year -- maneuvered the election and delivered "electoral results" to its perpetrators.

Amazingly, just like the infamous scene in Peanuts when Lucy whips away Peanut's football at the last minute, American voters seem to very dependably fall for the stunt every time. The various "themes" of these "surprises" very often run along the lines of war somewhere in the world, but occasionally, these "themes" are more directed at economic catastrophes.

In the excellent DailyKOS article posted below, the latter may well be the case. When the "dollar amount" one of these episodes places on the electoral table is labelled in "$Trillions," we should pay attention.

Please have a look.


There is a systemic and fundamental change going on in the global economy and it's time to pay attention.
With our economy and financial media engineered toward consumption, falling commodity prices generally don't register for most Americans. However, there are significant shocks from a collapsing commodity market that need to be recognized as non-negligible.

Eighteen of the 22 components in the Bloomberg Commodity Index have dropped at least 20 percent from recent highs, which means they are in a bear market.

The last time this happened was October 2008. 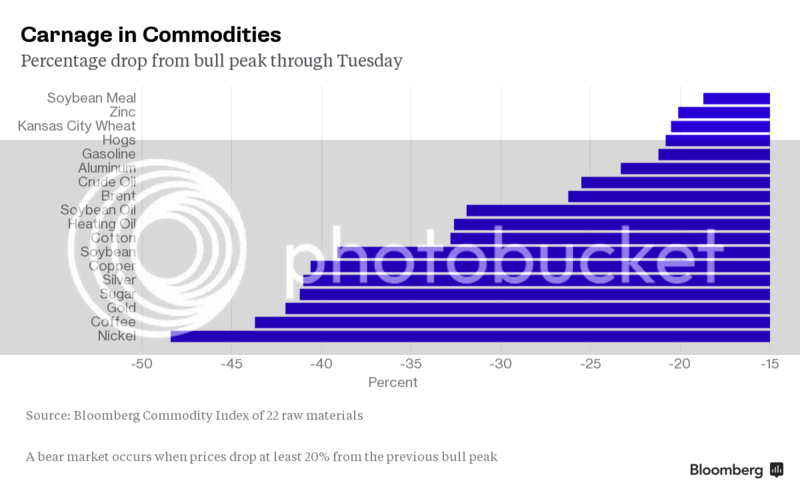 Eighteen of the 22 components in the Bloomberg Commodity Index have dropped at least 20 percent from recent highs, which means they are in a bear market. The last time this happened was October 2008.

People might have forgotten that the commodity market collapse in the summer of 2008, just months before the Lehman collapse almost took out the global financial system.

Of course, commodities also collapsed during the Asian currency crisis of 1997-98, which didn't threaten the global financial system.

So are commodities a leading economic indicator or not? The correct answer is: 'sometimes' and 'it depends'. 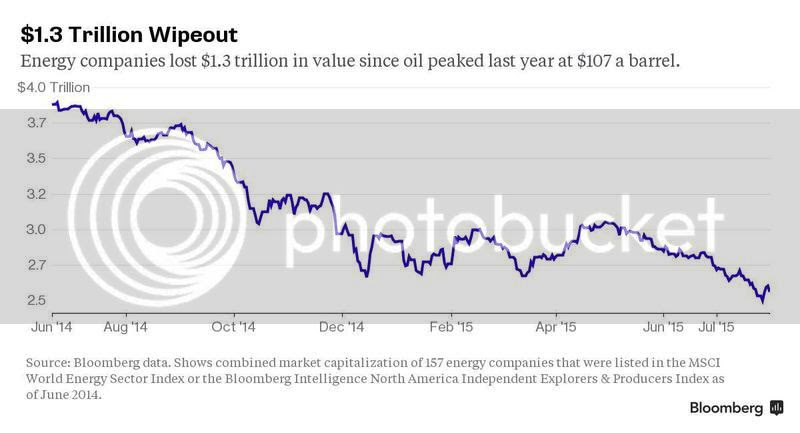 The center of this commodity collapse is the energy market.
Chevron's earnings were down a dramatic 90% from last year. Exxon's were down 51% y-o-y, the worst quarter since early 2009.
The collapse in energy shares alone adds up to $1.3 Trillion and is expected to create a $4.4 Trillion hole in energy company earnings over the next three years.
This has caused the energy sector to be the leading sector for layoffs in the entire economy.

As is typical, the biggest impact of the commodity crash is overseas in the emerging markets.

The hit is especially significant in the currencies and bonds of emerging market countries.


All told, developing-nation currencies have fallen to their lowest levels since 1999, and bonds denominated in those currencies have wiped out five years’ worth of gains. 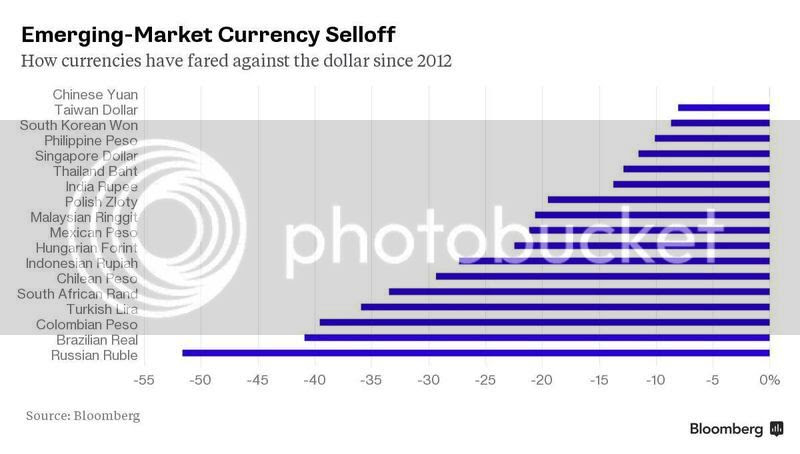 What's more, the collapse is expected to continue.

Leading this meltdown is Brazil, who's economic indicators are at a 2009 low, and its scandal-plagued government is in crisis.

Brazil may be the worst off, but all of the BRICS countries except for India are having trouble. Russia is in a recession.

Combining the BRIC problems with Europe's economic stagnation we get the sharpest decline in global trade since 2009.

So what does it all mean? It's hard to say right now, but it is something worth keeping an eye on.