Obama and SHELL - Crude Oil Chess In the Chukchi Sea

Just Stow the Obama Angst and Dispatch the Umbrage
If you've been paying attention to Barack Obama's poker playin',
these things have been quite consistently working out in the past.
"Know when to hold 'em, and know when to fold 'em."

There were plenty of liberal-progressive types anxious to "reveal the hypocrisy" when the President finally signed off SHELL plans to develop oil and gas production in the Chukchi Sea. Notably, he followed the decision with a nice long, Presidential visit to Alaska. Also notably, his Alaskan visit was clearly not exclusively intended to reassure the locals about the well regulated, "not so likely," prospect of another environmental crude oil disaster. His visit also included plenty of reassuring words about the economic impact which was "promised" with the opening of the lease territory or was "at stake" should the leases not be developed.

Interestingly, Obama seemed intent on publicizing the idea that "he had done his part."

We watched these examples unfold. We watched Gaddafi's Howitzers ringing Benghazi be abandoned in the desert. We watched the blood drenched dictator of Syria buckle under Obama's "line in the sand" -- the prospect of military action -- and relinquish his gas and biological weapons. We also watched the imposition of startling aggressive sanctions after the Russian Federation "annexed" Crimea.

Yes, the wing nut Republicans defined all these matters as "far too dangerous" as they were being implemented and as "complete failures" after they succeeded. Given the "unique" comprehension skills of the hill billies and bigots comprising the Republican base, these "up is down" ramblings gained a little traction -- even if only as a cheap cosmetic over the hateful, "post biblical" racism rampant among the GOP's cult-like "true believers."

So, we have arrived at the point of this post.

Was the President's decision to open the leases for the Chukchi Sea another case of the rest of us watching the chess game without seeing Obama's more distant strategy at play?

First, MeanMesa has GOOGLED a few articles which can bring visitors "up to speed" with respect to the history of the story unfolding now. The following article from Alaska Dispatch News provides a quite useful time line of SHELL's Alaskan history.

Shell in Alaska: A timeline 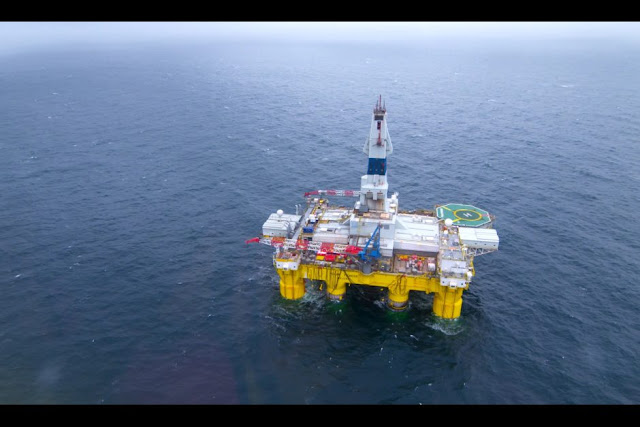 1918 - Shell geologists take their first look at Alaska.
1952 - Shell starts first Alaska geological maps, a project that continued until 1964.
1958 - Shell and Humble Oil and Refining Co. drill onshore Bear Creek No. 1 wildcat well on the Alaska Peninsula.
1963 - Shell, using a drilling vessel in Cook Inlet, drills the first offshore oil field in Alaska, the Middle Ground Shoal No. 1 discovery well.
1964 - Shell installs a permanent offshore drilling and production structure in Middle Shoal Ground in Cook Inlet, the first of 16 offshore platforms. Drilling begins there in 1965.
1976 - Shell drills the first exploratory well in the Gulf of Alaska, which is plugged and abandoned.
1979 - Shell acquires Beaufort Sea leases in federal lease sale.
1982 - Shell completes Seal Island well in the Beaufort Sea, later developed by BP under the name Northstar field Shell drills on Tern Island. Shell strikes oil at Seal Island in 1984. The prospect is later developed by BP as the Northstar unit.
1984-'85 - Shell drills two wells in St. George Basin of the eastern Bering Sea.
1988 - Shell dominates Chukchi Sea Lease Sale 109, which brings in $478 million in high bids.
1989-'91 - Shell completes Klondike, Burger, Popcorn and Crackerjack wells in the Chukchi Sea; finds major gas accumulation at Burger, plus accumulation of liquids.
1991 - Shell announces Chukchi discoveries are not commercial and it plans to sell its producing Alaska properties, which include Cook Inlet assets and a 0.14 percent interest in the Prudhoe Bay field; Shell announces it is closing its 50-person Alaska office. Chukchi Sea leases relinquished to the federal government in 1996.
2001 - Shell returns to Alaska to bid $2.4 million on 13 onshore leases in a North Slope areawide lease held by the Alaska Division of Oil and Gas.
2005 - Shell returns to the Alaska outer continental shelf, submitting $44 million in high bids at Beaufort Sea Lease Sale 195.
2007 - Shell spends $39.2 million to pick up tracts at Beaufort Sea Lease Sale 202.

Dec. 18: Shell announces it won’t drill in the Beaufort in 2009 but will regroup.
2009 - MMS approves Shell’s scaled-back Beaufort plan, which calls for one rig and one well a year for two years.

Shell submits plan for exploration drilling in Chukchi in 2012.
2010 - April 20: Blowout of BP’s Macondo well at the Deepwater Horizon rig in the Gulf of Mexico. The blowout kills 11 workers, creates the nation’s worst oil spill and triggers a sweeping revision fo federal offshore oil regulation, including a reorganization of the MMS into two separate agencies.
July 21: US District Court Judge Ralph Beistline rules the pre-sale environmental analysis for Lease Seal 193 was inadequate; orders a new remedial analysis. All Chukchi leases are suspended and on-site exploration is put on hold until the newly reorganized BOEM completes the remedial analysis, a process that takes until 2011.
2011 - Shell sits out drill season as it awaits EPA’s rewrite of a critical air-quality permit that had been overturned on appeal. EPA’s Seattle region completed the rewrite and the public review, and issues the new permit in September.

Shell submits a revised Chukchi plan, which wins conditional approval from the new BOEM.
2012 - Shell conducts limited exploration, starting a well at the Sivulliq prospect in the Beaufort and another in the Chukchi called Burger A. It is hampered by numerous logistical problems.

Shell is permitted to drill only top hole – not into oil-bearing zones -- because it failed to meet requirements for required oil-spill-response equipment. A dome system aboard the Arctic Challenger barge repeatedly failed U.S. Coast Guard tests, and was repeatedly denied Coast Guard approval. During one sea-trial test in Puget Sound, the dome was crushed and the structure had to be repaired. The ship and dome system eventually won Coast Guard approval in October, too late to be used in the 2012 drill season.

On the way to and from the drilling theater, Shell has numerous problems, mostly on Discoverer – a near-grounding in Unalaska Bay in July, an engine fire in November, detained by Coast Guard in Seward in November and December because of safety and environmental deficiencies.

Dec. 31: Shell loses control of the Kulluk drill ship while trying to tow it through a Gulf of Alaska storm; the ship grounds near Kodiak Island and is wrecked beyond repair, costing Shell its entire 2013 drill season.
2013 - Shell suspends the entire 2013 drilling season as Kulluk headed to Asia for repairs.

In August, Shell submitted a revised Chukchi plan that proposes to have two drill rigs operating simultaneously, with the Polar Pioneer taking the place of the damaged Kulluk.

2015 - In the first half of the year, regulatory approvals fall into place for Shell.

BOEM completes its remedial environmental studies for Chukchi leasing, and the Department of Interior affirmed the 2008 lease sale. BOEM approved Shell’s exploration plan, which the company had further revised in the spring. BOEM’s sister agency, the Bureau of Safety and Environmental Enforcement, gives approvals for Shell to drill two wells, Burger J and Burger V, but stipulates that no penetration of oil-bearing zones unless the icebreaker Fennica and its oil-capping stack are on scene. The Fennica has to be repaired after it tears part of its hull by striking an uncharted shoal in Unalaska Bay in July.

Sept. 27: Shell says Burger J results are not economic and it will end its Alaska exploration.

Interestingly, SHELL "explained" this costly decision to withdraw with roughly the reasons one would have expected: 1. the Chukchi drilling had not produced the results required to continue developing the field, and 2. the "regulatory uncertainty" of the EPA "treatment" of the enterprise made taking more risks unattractive.

While all this "reads" pretty well as elements in a banal, corporate press release, we can review the tedious process which handed SHELL the "go ahead" in the first place. There was plenty of "static" from protesting environmentalists all along the way, but SHELL is famous for completely disregarding such, to it, inconsequential irritants.

The point here is that the regulatory environment for every detail of the corporation's intended development plans had been thrashed out so thoroughly in court that "regulatory uncertainties" had already been D.O.A. months before the lease was finally approved. The EPA certainly wasn't inclined to leave any "loose ends" in their definition of the bargain, and, likewise, SHELL would never have accepted any "uncertainties" which would have possibly sliced into the corporation's anticipated profits.

Given all this, we begin to see Obama's "chess game."

Simply nixing the lease authorization would have inevitably precipitated a repeat of the right wing media orgasm which accompanied the final decision against Keystone XL. As already mentioned, not nixing the lease authorization had already incited near rebellion among the environmentalists who had previously been strong Obama supporters. This conflict presented "perilous waters" politically -- even for a President who would not face another general election.

MeanMesa has posted it before:

Underestimating the formidable political
savvy of Barack Obama has always proven to be a mistake.

In the same sense that an accomplished General selects and grooms a combat theater, President Obama selected the conditions which will prevail at the most favorable moment for SHELL's drilling authorization. We can recap them here.

1. SHELL and the other petrogarchs [Koch Industries], still smarting from the blocked Keystone pipeline project, had grown rather threatening over the delays the project had encountered with EPA approval. The contents of this threat were no mystery. "Block the approval of this drilling, and we will command our obedient media to attack you as a job killer who doesn't care how much gasoline is going to cost for Americans."

2. The Saudi Wahabists in Riyadh intentionally maintained Saudi oil production at a high enough level to glut the world's crude supply and cripple the economies of countries relying on higher priced oil. [This didn't help the highly oil dependent economy of the Russian Federation, either.] The other, more complacent OPEC members were injured by the move and complained mightily, but were not damaged by the low prices nearly as much as the old Saudi nemesis, Iran, and the rather frightening black market oil dealers financing ISIS.

3. The EPA, not wanting another repetition of the oil disaster in the Gulf, was easily inspired to "ratchet up" the regulations establishing the safety measures which would be required for the even more sensitive Chukchi Sea drilling. SHELL agreed to these conditions to gain the project's approval.

4. Even without the increased regulations for safe production, drilling in the Chukchi was going to be by its very nature, incredibly expensive. So expensive, it turns out, that selling the produced oil, even years after the drilling approval, would have yielded very little in terms of corporate profit for SHELL.

There is no way to know whether SHELL actually encountered low production levels from the first attempts at drilling because the corporation's business plan calls for the maximum opaqueness possible. The decision could have very reasonably been based almost solely on a mix of the economic impact of low crude prices coupled with the potential political utility of "re-imaging" the whole affair for use in the 2016 GOP campaign.

Obama, surveying the "land mines" littering this field, very strategically just gave SHELL -- and the savage petrogarchs skulking around in the smoke filled, political back rooms -- the nod. "Go ahead and begin your preliminary drilling in Chukchi. Just be sure to adhere to the EPA safety guidelines you agreed to when you negotiated for approval."

Ironically, although Barack Obama has endured years of right wing criticism for being an "enemy of the free market," this is a case of the President's tactical success at

Additional Reading
from Alaska Dispatch News on this Topic