Making Sense - Leave It To the Farmers

Taking a Second Look at Iowa
Amid the fury and feathers of the Iowa caucuses,
we find a quiet, determined realism.


Two of the really destructive "bad habits" of America's contemporary industrial media and "news" reporting are its annoying habits of:

1. creating a political caricature of Iowa which can be melded seamlessly into the latest, jaded tale of the State's "premier seat assignment" for holding the earliest primary, and an equally uncomplimentary caricature of the State's residents in agricultural areas [which comprise most of Iowa's area and hold 35% of Iowan residents] as howling, right wing lunatics obsessed only with the singular decision between other lunatics running a GOP Presidential candidates, and,
2. focusing entirely on large alternate energy projects located in urban areas where the energy produced serves for consumption by large, dense populations.

Neither conveniently simplified "shortcut" description enjoys much accuracy in terms of actual "facts on the ground." [MeanMesa worked for a time on a project in Ames, Iowa, several years ago.] In addition to the two misleading "leaders" mentioned above, we can also condemn the same media for consistently presenting exclusively nightmarish "climate change" scenarios heavily laced with sheer hopelessness -- the topical bias second only to stark terror as a persuasive ploy for network credibility.

Well, if you find yourself awash in this media nonsense, you may very well find the following New York Times article [quoted here in its entirety] a real breath of fresh air. Enjoy.

Iowa City — NEGOTIATORS en route to the United Nations conference on climate change in Paris, scheduled to begin later this month, should take a detour on rural roads here in Johnson County. A new climate narrative is emerging among farmers in the American heartland that transcends a lot of the old story lines of denial and cynicism, and offers an updated tale of climate hope.

Recent polls show that 60 percent of Iowans, now facing flooding and erosion, believe global warming is happening. From Winneshiek County to Washington County, you can count more solar panels on barns than on urban roofs or in suburban parking lots. The state’s first major solar farm is not in an urban area like Des Moines or Iowa City, but in rural Frytown, initiated by the Farmers Electric Cooperative.

In the meantime, any lingering traces of cynicism will vanish in the town of Crawfordsville, where children in the Waco school district will eventually turn on computers and study under lights powered 90 percent by solar energy. Inspired by local farmers, who now use solar energy to help power some of their operations, the district’s move to solar energy will not only cut carbon emissions but also result in enough savings to keep open the town’s once financially threatened school doors. 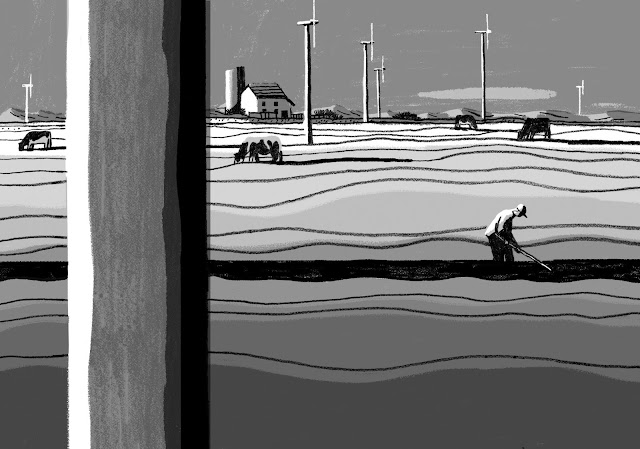 Wind turbines now line cornfields across the state, providing nearly 30 percent of Iowa’s electricity production. With some $10 billion invested in wind energy and manufacturing in Iowa, Republicans and Democrats alike recognize the benefits of green jobs.

This is only a beginning, of course. Dirty coal still accounts for 60 percent of Iowa’s electricity needs. But such centralization of electricity will falter, as other towns and cities follow the lead of Bloomfield, which recently announced plans to ramp up energy-efficiency efforts and shift its municipally owned utility — one of 136 in Iowa — to 100 percent energy independence, significantly through renewable sources by 2030.

But here’s the catch: Even if every coal-fired plant shuts down, land misuse still accounts for an estimated 30 percent of the world’s carbon emissions. The soils in the United States, like those of nations around the world, have lost calamitous amounts of carbon.

This is where Iowa’s new climate narrative has emerged as a great story for the nation and other countries heading to Paris. Despite the fact that the United Nations General Assembly declared 2015 to be “the international year of soils,” a global soil carbon sequestration campaign — one that recognizes direct links between climate mitigation, regenerative agriculture and food security — rarely ranks at the top of any high level accords, or even conversations.

Far too few climate change negotiators took notice of an important proposal called the Four Per Thousand Initiative, which France’s Ministry of Agriculture, Agrifood and Forestry introduced earlier this year. This proposal simply calls for a voluntary action plan to improve organic matter content and promote carbon sequestration in soil through a transition to agro-ecology, agro-forestry, conservation agriculture and landscape management. According to France’s estimates, a “.4 percent annual growth rate of the soil carbon stock would make it possible to stop the present increase in atmospheric CO2.”

To see the wisdom of such a proposal, you can visit the Versaland agroforestry farm in Johnson County, Iowa. In less than three years, a young farmer named Grant Schultz has planted more than 30,000 trees, introduced cover crops, composting and multispecies grazing, and transformed a once degraded industrial corn farm into a vibrant carbon capturing and storing ecosystem. Mr. Schultz is not alone; other farmers in Johnson County have joined a University of Iowa initiative to plant fields with perennial miscanthus grass, as part of a soil carbon sequestration and biomass program aimed at achieving 40 percent renewable energy consumption on campus by 2020.

In effect, Mr. Schultz and Versaland have completely shifted the climate change narrative in the heartland. Today’s farmers can play a key role in climate solutions.

Iowa has arguably the most altered landscape in the United States, with its native prairies having been reduced by more than 99 percent over the decades. As in other industrialized farming regions, volatile cycles of flooding, drought and erosion increasingly threaten farm and food security.

According to a white paper released last spring by the pioneering Rodale Institute, which studies and promotes organic farming, if management of all current cropland worldwide shifted to a regenerative model similar to that of Versaland and other organic farming sites, more than 40 percent of annual carbon emissions could potentially be captured. What Mr. Schultz and other Iowan farmers are doing is not only groundbreaking; it’s also giving the heartland a new future.

But such efforts are only a first step in what should be a global campaign. That begins by international negotiators’ committing to binding measures that increase soil organic carbon stocks as a key part of any climate solution and deal.

[Jeff Biggers, a writer-in-residence and the founder of the Climate Narrative Project at the University of Iowa, is the author of “Damnatio Memoriae.”]
Posted by Chad H at 8:17 PM