Nothing To Hit But the Heights?


This old article is a thought provoking reminder -- US working conditions may not be all that they're cracked up to be. In the aftermath of the 2016 election we'll see the "back side" of the political promises aimed at working Americans during the campaign.

Just remember. We now have a White House chuck full of bankers, lobbyists and creepy generals who were judged to be too crazy to keep their jobs in the years past.


The U.S. is the Most Overworked Developed Nation in the World – When do we Draw the Line?

We, as Americans, work too many hours. If you don’t believe so, check out the following data points that compare us to our peers around the world. 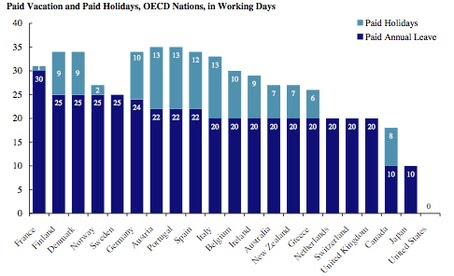 The Impact of Too Much Work

I’m not telling you to work less hours. If you genuinely love what you do and are doing it for the right reasons, you are more than entitled to spend all of your waking hours plugging away.

But for many of us, more work leads to more stress and a lower quality of life. Without time to unwind, take care of your home, spend time with loved ones, enjoy our hobbies, connect with friends, and generally live a more balance life. Stress is the #1 cause of health problems – mentally and physically. And there are few things that stress us out on a consistent basis like work does, especially when it takes away from all of the other things that life has to offer.

Americans are the Outliers

And if all of this data tells anything, it’s that we are the outliers, not the norm. Why are we the outliers?

What we All Need to Remember

What we all need to remind ourselves is that it doesn’t have to be this way.
Don’t let life pass you by in the name of fear, circumstance, greed, or misguided hopes. Sometimes you just need to draw a line in the sand and say “enough is enough”.