Why the Rustbelt is Bleeding Manufacturing Jobs

The US Economy's "Open Wound"
Decades of Reaganomics targeting the rust belt for permanent economic destruction.

There were, actually, plenty of opportunities.

Unhappily, however, in each instance rather than applying political decisions to bolster sustainable economic activity -- in this case, trade, import and investment incentive policies which would have served to increase manufacturing activity and make it more economically durable -- enterprises in the rust belt were exposed to a lethally cynical dose of political and economic austerity.

The chart [left] shows the details of this dismal picture. It also shows that financial and business service sectors were the primary growth areas. We can pretty confidently presume that Donald Trump, befuddled by economic issues in general and further seriously handicapped by his distaste for politics which require actual facts or careful scrutiny, will find himself completely incapable of reversing much of this damage. That said, we also have plenty of recent history supporting a similar lack of determination and effort on the part of the Democrats.
Granted, there are currently few Democratic votes to be harvested from these states, but we've seen little effort since the "48 state campaign policy" of Obama's DNC to court favor by solving these long term problems.

The results were not happy.

Three "Key Lessons" About the Importance of
"Keeping Up With the Times"
Reagan officially "ushered out" the Golden Age in the 80's.

Here are excerpts from two fine articles. MeanMesa encourages visitors to visit these sites and read both of the original posts.

What can the crisis of U.S. capitalism in the 1970's
teach us about the current crisis and its possible outcomes?

Mainstream (“neo-classical”) economists often act as if capitalist economies operate according to unchanging universal laws, and that any violation of these “laws of the market” (such as government macroeconomic intervention, industrial regulation, social welfare spending, unions, etc.) inevitably spells disaster. The performance of the U.S. economy during the so-called “Golden Age,” from the late 1940's to the early 1970's, belies this view.

Our first key lesson: Capitalist economies can operate under a wide variety of institutional frameworks that foster capital accumulation and economic growth.

What brought the “Golden Age” to such an inglorious end? The conditions that fostered successful capital accumulation and economic growth in the United States during the “Golden Age” broke down toward the end of this period. The postwar institutional framework, so successful in conventional terms for a quarter century, gave way to crisis not only because conditions changed around it, but because its own operation undermined its continued viability.

Our second key lesson: As conditions change, an institutional framework that had fostered capital accumulation and economic growth may come to hinder them.

When looking at history retrospectively, it is sometimes hard to remember that the outcome was not a foregone conclusion—that things did not have to turn out the way they did. That the postwar framework was “interventionist,” however, does not automatically mean that its demise would give rise to a “free market” framework, as if economic policy swung like a pendulum between two fixed positions. Multiple policy proposals contended as possible ways out the 1970's crisis. Among these were proposals that would have increased the role of government in economic life: “incomes policy” (in which the government plays a much larger role in determining the distribution of income between labor and capital at a national level, as in many Western European social democracies) and “industrial policy” (in which the government plays a much larger role in directing investment to particular sectors of the economy, an idea given traction in the 1970's and 1980's by the success of Japan with such policies). The triumph of “neo-liberal” capitalism in the wake of the 1970's crisis was not inevitable.

Our third key lesson: The outcome of a crisis is not preordained by the characteristics of the preexisting framework or the details of the crisis itself, but determined by the balance of power among different social groups with conflicting interests.

The Plight of American Manufacturing

Something has gone radically wrong with the American economy. A once-robust system of "traditional engineering" -- the invention, design, and manufacture of products -- has been replaced by financial engineering. Without a vibrant manufacturing sector, Wall Street created money it did not have and Americans spent money they did not have.

MSNBC's Morning Joe broadcast one of his rare "content heavy" episodes on this subject with an interview of Steve Rattner, a well spoken, well informed and refreshingly thoughtful, former US Treasury official.

Mr. Rattner began his interview by asking the question "How many manufacturing jobs have been lost in this year?" 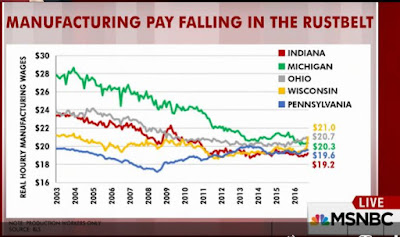 After entertaining several incorrect estimates from Morning Joe's "panel," he answered his own question:
62,000. 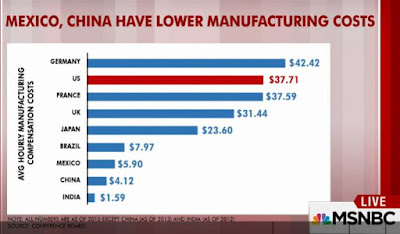 Further, with the largely GOP sponsored trade policies which have rewarded job exporting businesses with incentives such as tax deductions for the costs of exporting jobs to lower labor rate countries, there has also been the inevitable pressure on the jobs remaining in these rust belt states. By essentially eliminating any labor "push back" with the threat of even more job exports, pay rates for manufacturing employees have been steadily dropping, too.

The third chart [right] shows in very clear terms why the corporatists are so attracted to Brazilian, Mexican and Chinese alternatives.

Whether it might be possible to justify the practice or not, the "exporting jobs" process is quietly wrecking any possibility of a US economic future which is based on these rust belt regions returning to their previous prosperity. Without some really creative federal intervention with some really innovative -- and daring -- new economic policies, the smoldering state of the debris remaining of the US manufacturing economy is becoming unpleasantly permanent.

National Debt, a Wounded Economy and the Top 1%
Some National Economy Charts
Before Reagan the national economy relied on good paying manufacturing jobs.
Now, all we make in the United States
is a few more billionaires and lots more poor people.

A quick glance at the chart [left] goes a long way in explaining why the GOP reactionaries such as House Speaker, Paul Ryan, are so infatuated with what they continually describe as the "absolute necessity" of cutting "entitlements." This "explanation" of theirs is based on the justification that these darned "entitlements" are driving the debt side of the current national economic disaster.

Perhaps the most important label to notice is at the bottom, buried in the grey: "Debt without these factors." The suffocating, mustard colored, debt nightmare at the top represents George W. Bush's war time tax cuts.

Although gains in productivity translated to increased wages through the early 1970s, compensation has remained essentially flat since then despite a two-fold increase in productivity. The post-Reagan model reverses this trend -- productivity, thanks to manufacturing technology, continues to increase, but wages decrease.

As the still growing manufacturing wealth continues to disappear into the billionaires' dynastic fortune pits, the low wages paid to manufacturing laborers decreases to an even lower rate just as continuously. In terms of the national debt the billionaires have "made arrangements" with Congress to pay very little in taxes, but the "post middle class" workers continue to pay taxes at the full rate.

Why did this happen? Derek Thompson at The Atlantic magazine explains:

“As manufacturing eroded, so did unions, whose coverage fell from 27% in the early 1970s to just 13% in the late 2000s. Without unions, middle class workers without skills to move into higher-paying jobs lacked the collective power to bargain for higher wages.”
Stagnant wages and exported manufacturing jobs inevitably lead to reductions in tax revenue and growing levels of debt.

However, as mentioned before, manufacturing wages have been disconnected from increases in productivity. Some of this may be attributed to increases in efficient automation, but the energy of the manufacturing laborer still remains probably the highest factor in these increased profits.

Still, if manufacturing management can devise this technology so it can be operated by laborers with less energy and a lesser necessity to be motivated toward productivity -- as is the case when entire, high tech, high productivity factories are out sources to low cost labor countries -- these "productivity profits" completely escape exposure to US taxation.

The two "alternative top marginal tax rate" circles on the final chart [left] show the precise outcome of the GOP obsession with the thoroughly disproved theory of "trickle down" prosperity -- continually lowering the tax rate for the Party's Owners. The US economy has "trickled down" just about as deep as it can go.

This is what MeanMesa means by economic neglect. The only reasons we find ourselves facing this now is simple. It's been the official policy for the Billionaires and their "wholly owned" Republican Congressmen for decades.

It's working very well for them.
The Chilling Similarity - and Historical Irony
Take a look at Eastern Ukraine
While the rust belt dilemma confronts the central US with its collection of problems -- economic, unemployment, low wages and general stagnation, a similar situation is developing in other "previously optimistic industrial" regions around the globe. Economic development which had looked to be promising a few decades ago, especially [for this post] industrial manufacturing economic sectors, have steadily lost the competitive edge which had been the foundation for these promising "earlier states."

Although the entire list of examples of such gradual declines is quite plentiful, MeanMesa would like to select the case of recent events in Ukraine for the application of this model.

While during Soviet times the industries of Eastern Ukraine could have hardly been described as "cutting edge" cases of efficient manufacturing management, they still functioned roughly as well as most of the old Soviet's satellite enterprises. Although many of the economic parameters driving this "functionality" were artificial necessities injected into the system to mitigate other business weaknesses of the Soviet's collective approach, the end result was a more or less normal period of moderate prosperity.

Unemployment was maintained at an acceptable level. The controlled markets provided by "consumers" across the vast Soviet hegemony may have "lurched" a little here and there, but the larger picture was one which made some degree of sense to those participating in the system. The Kremlin was determined to keep the whole business "moving" to sustain its own interests.

Then, rather suddenly, the Soviets began to run short on the resources they had previously been injecting in such efforts, in this case, resources dedicated to maintaining Ukrainian collective industries. As the "advantages" of being a Soviet satellite gradually evaporated, the market irregularities which had previously been at the heart of the heavy industries in Ukraine's east "came home to roost."

Just as in the case with the US rust belt, while the impacts of these changes were not immediate, they were steady. Degrading conditions in the east, when compared to a more stable out look in the west, began to divide Ukraine's citizens politically. Understandably, the "westerners" were tempted to look to organizations such as the EU, while Ukraine's "easterners" were attracted by the prospect of returning to the "old, although not so swell, still sufficiently stable" Russian economic alliances.

Of course there were probably plenty of opportunities for both the new Ukraine government and the Russian Federation experts in Moscow to avoid the "slump" which occurred in the Ukrainian east, but there were also plenty of "complications" unfolding during the process, too -- a Ukrainian dictator who was absconding with piles of the local hryvnia [current exchange rate around 26 cents to a US dollar], a revolution [at least in the west of the country] and lots of violence, not to mention some very direct shifting and shaking in the global geopolitical climate.

None of this is intended to be a new analysis of the current Ukraine situation. Instead, it is merely a brief recap of the similarities between the state in Ukraine's east and the situation in the US rust belt.

Unhappily, there are, apparently, no quick solutions to either one.
Posted by Chad H at 4:24 PM