Trump Cabinet:
They're Not Necessarily Bad People
Just Because They Happen To Be
Swamp Dwelling Parasites
Many of the bites are not that infectious
-- at least when they're inflicted one at a time.

It's a waste of time explaining MeanMesa's utter disgust with the "news" of even one Democratic Senator's vote to approve a Trump cabinet nominee. This is not a process designed with the goal of political maneuvering or making down payments on Senatorial "favors" to be "repaid" later.

That's not how it works.

One week into the Trump "Presidency" we are already hearing about GOP plans to pocket the Social Security Trust fund, permanently cripple Medicare to "free up" tax cut money for the billionaire owners of the GOP, obliterate the EPA while prohibiting public access to any current climate research and lethally "stain" what's left of the country's reputation by selling the State Department to EXXON. With these details enumerated, we can turn to some of the "flashier" Trump gambits such as handing the citizen benefactors of the ACA back to the industrial health insurance corporations so the process of premium cash extraction can return to its previous extortionist levels.

Think of it as "re-exisiting" all those recently covered "pre-existing" conditions.

Well, most of these insults must be actually implemented by the rather odorous tribe of unpleasant looters being elevated to Cabinet positions. While there are a few liberal pundits lamenting the fact that these nominees haven't been vetted prior to their "downhill toboggan slide" [most of them were approved in minutes on a "no questions asked" basis] approval by the sold out Senate, MeanMesa actually doubts this. MeanMesa is pretty sure that these despicable swamp dwellers HAVE, in fact, been vetted. Does anyone think that Donald Trump selected them by mistake?

There will be no "surprises" to Trump as this gang begins their economic "liquefying" process to complete the extraction of everything left after the Republicans "liquefied" national middle class wealth in the 2008 extraction. [An interesting group of interactive charting by the New York Times: How the 2008 Recession Reshaped the Economy/NYTIMES] Economists predict that it will require two decades of steady economic growth to recover the wealth lost [that is, largely redistributed to the 1%] during the 2008 debacle. With this crowd in charge of the various agencies of the government, we can comfortably extend that recovery period by a few more decades. 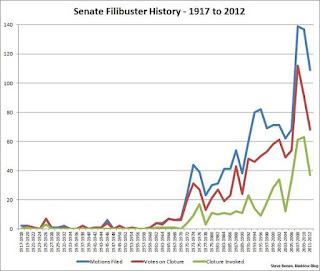 You’ll notice a sharp drop in the number of filibusters in the most recent Congress. While that might suggest signs of progress to some, it’s not – the drop only came as a result of the GOP-led House passing far-right bills the Senate didn’t care to pass. And even despite this fact, the 112th Congress saw the third most filibusters of any Congress in the 223 years the Senate has existed.

Total Obstruction of Judicial Nominees
"It's a Law We Can Live With."
Not really. It's a law Republicans have jammed down our throats.

Understand. Control of the judicial system is an absolute necessity if you are an oligarch with the ambition of completely controlling the United States economy -- and wealth.

No one has ever actually seen an example of exactly what happens when the contest is between billionaires and the court system. This is because such conflicts have been "buffered" in past cases. Yes, the courts have fallen far short in fulfilling their responsibility to interpret and uphold the "raw law" as it is written in legislation, but, No, the courts have never -- yet -- brazenly made decision after decision completely to the benefit of their oligarchic sponsors.

"Things" [judicial decisions] have always been "patchy" enough to sustain a general sentiment among the governed that the judicial system remains theoretically fair. Nonetheless, as the billionaire class has steadily implanted more and more ideologically slanted individuals into the role of judges -- at all levels in the system -- the decisions are veering toward a far less believable "judicially objective" trend.

While the Democrats have been guilty of this in the past, more modern times see the Republicans obsessed with the same practice -- an obsession now amplified to a shocking degree.

The most egregious case of Republican judicial obstruction is not included in the chart [left].


That would be the treasonous scheme fomented and executed largely by the disgraceful GOP head of the Senate, Mitch McConnell, when he denied even a hearing on the final Supreme Court appointment of President Obama.

[This was a Presidential appointment Constitutionally required following the death of Scalia -- hence, treason.]

Judges at the Federal level and, certainly, judges at the Supreme Court level are appointed for life. Although a now, clear majority of Americans are anticipating the removal of Trump from the Presidency far sooner than the 2020 election, the judges currently being shoe horned into the country's judicial system will continue to deliver "decisions" far into the future.

How far into the future? Old age is rapidly closing on the progressive voices among the current Supreme Court. With a "permanent" insertion of a new appointment sympathetic to the oligarch class, the Supreme Court will ruthlessly deliver one decision after another in favor of the billionaires and corporations until your grandchildren are bringing home their own babies.

Worse, the current plan for a deep saturation of appointments to the lower level Federal courts will continue to generate an endless stream of one sided verdicts just as long, too.


Democrats: DANGER - Do Not Reach Across That Aisle!
You've already managed to hand the Republicans almost everything.
Don't hand them any more.

There is already more than a little "mind numbing" chatter about "making the Trump Presidency" normalized -- or, perhaps, even just appearing normalized. Unhappily, this wishful thinking is roughly as possible as "making a silk purse from a sow's ear." Everything about what has landed upon us is abnormal. It will proceed to become increasingly abnormal for so long as it metastasizes through each additional chunk of the remnants of our democracy.

The Republicans -- absolutely all of them -- are entirely committed and complicit in this coup d-etat. None of them has been "mysteriously transformed" into a democracy loving citizen with the best interests of the country at heart. They are nothing more than a coat and tie gang of raucous looters, scavenging through whatever's left to be found of middle class wealth. They've done it before and fairly recently.

Another important side of this concerns what they haven't done before. The Republicans haven't proposed or enacted anything which might benefit anybody living beyond the security gated circles of the Party's country club owners.

The Trump Inauguration saw plenty of seated US Judges -- at all levels of the judicial system -- who remained faithful to their oath in support of the US Constitution. The reactionaries on the Republican side prevented the addition of many nominees with similar sentiments through the Obama Presidency. Now, the same anti-democracy interests are on a mad rage to purge the entire system to a dismal, yet depressingly durable state of "oligarchic judicial purity."

Even the new President has taken to referring to such Judges in quotation marks in his vile, petty tweets.

Not entirely sure you know exactly what MeanMesa means by oligarchic judicial purity? Just spend a few minutes with it. Review the legal decisions for the last four decades. Along side a few highly publicized "judicial treats" such as Roe, same sex marriages and subsidized health insurance, we have seen an on going flood of decisions such as Citizens United nested in with an absolute void of more subtle insults such as the rejection of public opinion about back ground checks.

However, these decisions deal largely with the social culture. When the rags are ripped away revealing the "money game," the courts -- especially the Supreme Court -- have been in a decades long "trance of service" to the billionaires -- preparing the field for exactly the take over which has now occurred.

"Scorched Earth" means that no Democrat will vote, not even a single time, for any of this traitorous nonsense. Not for legislation. Not for any candidate for a cabinet office. Not for any Republican toady propped up as a "normal" Supreme Court Justice.

We have already seen Democratic Senators attempting a suicidal "play nice" with some of the cabinet candidates.

We have your names.