Stitching Up The Trump Russia Connection

Clearing Up The Fog
Trump has intentionally confused the voters.
Don't be confused.

We are familiar with the "drip, drip, drip" process of revealing complicated government maneuvers which emerge on a day by day time schedule. The labyrinthine opacity of the hyper active Trump Presidency as it careens through one Constitutional scandal after another produces a chaotic image which -- although apparently necessary to constantly confound the Trump base -- presents an image of drag racing through an exploding fireworks factory to everyone else.

Among all the daily outrages we must remember that Donald Trump is now engulfed in the process of reimbursing the Russians for all the great work they did to get him elected. The bill has become due and payable.

All the rest of this "stuff" amounts to nothing more than a series of high speed distractions to delay the inevitable, final, crushing revelations about his Russia ties long enough for him to make good on his debt. Russian oligarchs such as Vladimir Putin can be, well, quite demanding.

So, maintaining a clear understanding of just what final product all these "threads" are being "woven" into is critically important if we are to somehow resurrect the democracy. In this matter the work of the Democratic Congressman from the 15th District of California can really help clear up the confusion.

Eric Swalwell sits on the House Permanent Select Committee on Intelligence and the House Judiciary Committee. [He has previously been a member of the Committee on Homeland Security and the Committee on Science, Space and Technology. You can visit the original article on his Congressional web site at https://swalwell.house.gov/issues/russia-trump-his-administration-s-ties]

A Recap Of Trump's Russian Connection

Despite Russia’s harmful national interests against the U.S., and its human rights violations around the world, President Trump and his team are directly and indirectly tied to Russia.

Throughout the 2016 presidential election, President Trump not only refused to criticize Russian President Vladimir Putin, but was even friendly and accommodating in his remarks. In his own words, President Trump called President Putin “highly respected." More recently, President Trump put the U.S. on equal moral footing with Russia when responding to Bill O’Reilly’s question about Putin being a "killer," saying "We've got a lot of killers... you think our country's so innocent?" This is absolutely false moral equivalence, and unheard of for the President of the United States to insult and demean the country he leads. 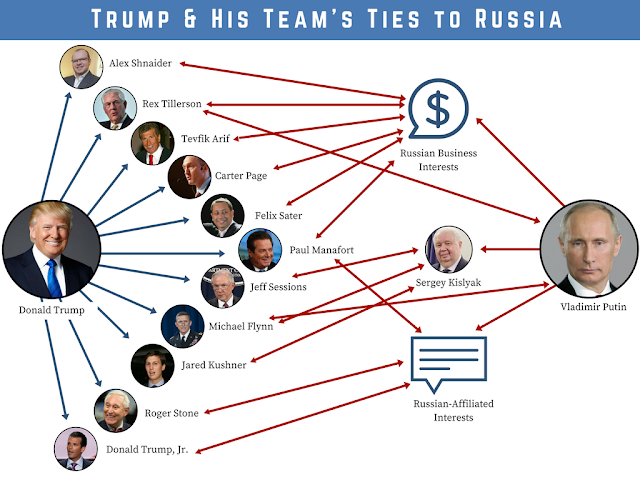 President Trump has harshly criticized NATO, and exclaimed that only the NATO allies that paid equally to the alliance deserved protection from the United States. Though these remarks were softened by British Prime Minister Theresa May, who claims that President Trump fully supports the North Atlantic Treaty Organization (NATO), it's still unclear how supportive he will be of NATO allies like the Baltic states in light of his relationship with Russia.

President Trump has also surrounded himself with people who do business with and are sympathetic to Russia. The New York Times reported that members of Trump’s 2016 campaign and other Trump associates had frequent contact with senior Russian intelligence officials throughout the campaign. In addition to these questionable communications, here are a few other associates with ties to Moscow:

In addition to these ties, it appears that Trump and his team are conscious of their guilt. In late February 2017, CNN reported that “the FBI rejected a recent White House request to publicly knock down media reports about communications between Donald Trump's associates and Russians known to US intelligence during the 2016 presidential campaign.” This request may be a violation of procedures that limits communications between the White House and FBI on pending investigations.

Why is America’s leader and his team so close to Russia? This is either due to poor judgement or a deeper personal, financial, or political link between President Trump and Russia. It is not normal for the leader of our country to be so extensively tied to a foreign government that has sought to undermine democracies across the globe, and connections like these should be concerning to American citizens everywhere.
Posted by Chad H at 1:23 PM