March 7, 2017 - "Black Tuesday"
Republican "Replacement"
For ObamaCare Emerges From
Its Locked Dungeon in Ryan's House Basement
Be sure to take your vitamins. This is NOT the time to get sick.

While the details of the new Republican "plan" remain intentionally very foggy, the article [below] lays out what the Republicans will almost certainly be hiding from sight as they reveal the product of months of their work behind closed doors.

MeanMesa is sure that they have been hard at this task before them, led at every juncture by the steady guidance of Donald J. Trump, the Party's unquestioned ideological guide and directer.

The GOP probably got off to a really great start after receiving a nice package of "campaign donations" from the Big Health lobbyists on K Street, but once these compassionate, patriotic, caring souls encountered the part where it became necessary to "think of others," they, of course, got stuck.

Republicans don't do "others." 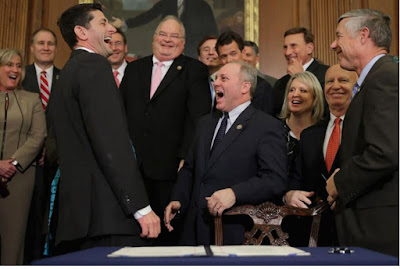 Speaker of the House Paul Ryan shares a laugh with Republican members of Congress after signing legislation to repeal the Affordable Care Act, also known as Obamacare, and to cut off federal funding of Planned Parenthood during an enrollment ceremony in the Rayburn Room at the U.S. Capitol January 7, 2016.
[ Chip Somodevilla/Getty Images]
New Republican health
care blueprint falls far short
02/21/17
By Steve Benen
Congressional Republicans have been working on a health care reform plan – behind closed doors, away from public scrutiny – for more than seven years. Periodically, GOP leaders assure everyone that their alternative to “Obamacare” is nearly complete, and its unveiling is imminent, only to quietly change the subject soon after.
As lawmakers left Congress late last week for a week-long break, the Republican replacement for the ACA still doesn’t exist, but House Speaker Paul Ryan (R-Wis.) didn’t want to send his members home empty-handed – especially knowing that they’d face concerned constituents, fearing what GOP lawmakers might do to their families’ health security – so Republicans left DC armed with an outline of some vague ideas about where the majority party is headed.
That’s the good news. We’re a long way from having a real, detailed GOP plan to consider, but we can at least take a closer look at what Ryan & Co. have come up with thus far, which is better than literally nothing.
The bad news is, you’re really not going to like the Republican outline. A New York Times editorial yesterday summarized the key provisions nicely:

In a half-baked policy paper released on Thursday, the House speaker, Paul Ryan, trotted out washed-up ideas for “improving” the country’s health care system that would do anything but. For example, the paper calls for reducing spending on Medicaid, which now provides insurance to more than 74 million poor, disabled and older people. Many millions of them would be cast out of the program.
The Republican plan would also force most people who don’t get their health insurance through an employer to pay more by slashing subsidies that the A.C.A., or Obamacare, now provides. The proposal would allow families to sock away more money in health savings accounts, which may sound good at first but would primarily benefit affluent people who can afford to save more.

As is always the case, the devil is in the details, and the specifics of the latest Republican “plan” – I’m using the word loosely – can’t be examined in earnest because they don’t yet exist.
That said, we know enough about the effects of the key GOP priorities to understand the damage that would follow the implementation of the Republican ideas. Dismantling how Medicaid works, for example, would do brutal harm to millions of low-income Americans.
And we haven’t even touched on the politics yet.
As many GOP lawmakers are starting to notice, the Affordable Care Act is suddenly enjoying its strongest support to date, and activism to protect the reform law against attacks from the right has put Republicans on the defensive. It’s against this backdrop that Paul Ryan not only has to figure out a way to kill “Obamacare” without leaving tens of millions of families with nothing, but also pay for his party’s alternative without the ACA-related taxes his party is desperate to repeal.
The latest proposed approach, as Vox explained last week, calls for capping the tax exclusion for employer-sponsored health insurance, which would cause massive systemic disruptions, and which many congressional Republicans – and their lobbyist pals – would very likely reject. Republicans could try to scale back the policy, but then they wouldn’t have the money to afford their own plan.
Complicating matters further, many conservative lawmakers have also voiced opposition to Ryan’s plan for refundable tax credits, dismissing the policy as an entitlement comparable to “Obamacare lite.” (This isn’t the only area of disagreement within the majority party.)
And speaking of tax credits, as a New York Times report added last week, the heart of the Republicans’ latest outline is an approach that would “redirect federal support away from poorer Americans and toward people who are wealthier,” in part by eliminating ACA taxes that currently target the richest Americans, while simultaneously eliminating ACA benefits that currently go those with the least.
What about coverage levels, you ask? Without more details, it’s difficult to say with confidence exactly how many families would lose their health security if the Republican approach becomes law, but one GOP lawmaker conceded just last night to MSNBC’s Chris Hayes that some Americans who currently have insurance may lose it under the Republican plan – which would not only cause a political nightmare for the party, but would also directly contradict the assurances the public has received from Donald Trump and his White House team.
And yet, despite all of this, the GOP leadership insists that the party’s actual plan will be unveiled as early as next month, at which point the debate can really begin, as Americans start to discover how vastly superior the Affordable Care Act is to the Republican alternative.
We’ll get into the legislative hurdles if/when the process gets to that point, but as things stand, there are plenty of reasons to be skeptical about the GOP’s health care ambitions.

Although the Maddow Blog article appeared a week ago, it is included here because it lays out the central questions which we will all want to answer as the thing moves ahead from here. MeanMesa suspects that there will be a serious Republican attempt to lather this pig up to look like something else with major coats of "fake news," so keep an eye of how this will affect you and your family's coverage.

For a look at two additional, helpful articles about what is found in the new plan, visit these links.

New Details Emerge on GOP Health Plan/WashingtonPost
The Reviews are In - Paul Ryan's ObamaCare Plan Makes Everyone Want To Barf/SLATE
Posted by Chad H at 1:00 PM