The Trump Administration's "Last Refuge"
Deceptive  GDP Growth
"It's beginning to look like pretty slim pickin's, Big Daddy."
Since health care, tax reform and immigration are stuck,
starting a war and GDP growth are about all that's left.

Trump's Administration has now performed a painfully mediocre effort to "appear" as an actual Presidency -- at least, Donald hopes -- to appear as such to the "lower echelons" of the Russian cultured, heavily maneuvered nihilists who elected him. However, to those with a more objective expectation of a "reasonably effective administration" from either Party, the Trump charade is rapidly wearing thin at an alarming rate.

With the President's health care plan and the President's tax reform plan both mired in the current scandal around the White House and the Russians Donald Trump will, most likely, now turn to either starting a war or attempting to force Congress into a "raw effort" to demonstrate national economic growth -- or something simpler which might appear to be roughly the same to his low information voter base.

Of course, this President might take both tracks simultaneously. However, if "walk and chew gum" is to be the new model of the Executive Branch, we can probably still expect additional results which are similar to those we have already seen. This post is about economics. We can leave the "un-elected Republican President's appetite for war" topic for a future post.

Given this, MeanMesa now presumes that the most important political priority in Trump's mind has everything to do with the behavior of the US GDP. The reasons for this unusual [that is, unusual for an un-elected Republican President] interest in the national economy are best explained as a desperate political ploy adopted as a priority only after the other possible priorities are no longer politically accessible.

In terms of Trump's image as a successful business man, and in keeping with the irritatingly ridiculous, self-aggrandizing promises during his campaign, a national GDP which was "showing growth" at some point in his first year would be "roses, simply roses" for his unshakable fear of being revealed as utterly incompetent.

We should note here that the Trump budget proposal, an unabashed, reincarnation of the same trickle down policy disastrously inflicted on the country by previous GOP Presidents, is touted as "justifiable" based on a presumption of a 3%+ growth rate for the GDP. The mortally injured US economy "left in the land fill" after Bush W's 2008 Republican disaster has not been able to muster such a 3% growth rate since then. [Can the US Ever Get Back to a 3% Growth?/FORBES]

The Trump Administration is currently arguing that this 3% growth rate becomes, essentially, inevitable after Big Daddy's "Fat Trimming, Fiscal Austerity Ax" has eliminated lots of waste and abuse in government spending. Trump's proposal for gleefully dropping an additional $50 Bn on the Pentagon's "military spending doorstep" like an abandoned baby probably won't help that much, either.

A Quick "Refresher" Course on the US GDP
Naturally, any 800 different politicians would like
to specifically define it 400 different ways. 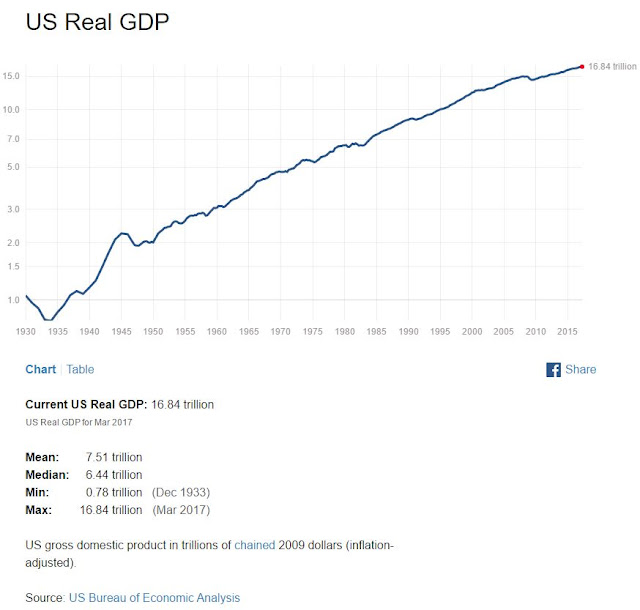 
The Gross Domestic Product measures the value of economic activity within a country. Strictly defined, GDP is the sum of the market values, or prices, of all final goods and services produced in an economy during a period of time. There are, however, three important distinctions within this seemingly simple definition:

GDP is a number that expresses the worth of the output of a country in local currency.

GDP tries to capture all final goods and services as long as they are produced within the country, thereby assuring that the final monetary value of everything that is created in a country is represented in the GDP.

GDP is calculated for a specific period of time, usually a year or a quarter of a year.

The "Trick" Trump Will Try
Watch out for the "trickle down!"
Not really.

MeanMesa suggests visitors begin by watching a 1 minute video explaining how the GDP is calculated: How to Calculate a GDP/INVESTOPEDIA. Pay especial attention to the "income approach" part of the video.

Considering that the other side of the spending coin is income and since what you spend is somebody else’s income, another approach to calculating GDP is based on a tally of the national income. Income earned by all the factors of production in an economy includes the wages paid to labor, the rent earned by land, the return on capital in the form of interest, as well as an entrepreneur’s profits. An entrepreneur’s profits could be invested in his own business, or it could be an investment in any outside business. All this constitutes national income.

Importantly, this explains that "income" received by the oligarch class of Americans "folds right into" the national calculations. When the rich get richer, the national GDP increases to reflect it. This is important because Trump voters have been led to believe that an increase in national GDP under Trump economic policies would result in increased prosperity at their level.

If this were to actually work out with this result, it would vindicate the right wing's historical claim that "trickle down" economic policies actually worked. They don't. They never have. In fact they have never worked anywhere they have ever been tried.

The "GDP Question" Becomes
the "Wealth Redistribution Question"
Will Trump's economic policy "successes" be "trickle down" or "trickle up?"

Trump may well be able to increase the national GDP, but if he does, the "shiny new wealth" will not get very far beyond the Goldman-Sachs bankers surrounding him in the Oval Office. Rectifying a crippling trend which sends almost all increased "earnings" directly to the top 10% of the economy turns out to be a far more complex policy challenge than boosting the GDP by selling off the national parks.

To "flesh this out" a bit MeanMesa has selected 6 of the 11 charts in a recent Mother Jones article. [Visit the original the original article here - 11 Charts That Show Income Inequality Isn't Getting Better Any Time Soon/12-22-2016/MOTHERJONES]

The middle class is still struggling

First, some good news: Last year, middle-class households reaped an income gain of 5.2 percent, the highest level since 2007. Now the bad news: Despite such overdue gains, average American households are barely making more than they did in 1980. Median household incomes have risen just 17 percent (in real dollars) during the past 35 years, lagging far behind GDP growth. Meanwhile, the corporate profits and the average income of the top 1 percent of earners has skyrocketed.

The superrich are still thriving

The average income for the top 0.01 percent of households grew an astounding 322 percent, to $6.7 million, between 1980 and 2015. Despite seeing 3.9 percent growth in the last year, the highest rate since 1998, the average income of the bottom 90 percent has effectively flatlined, increasing just 0.03 percent since 1980. 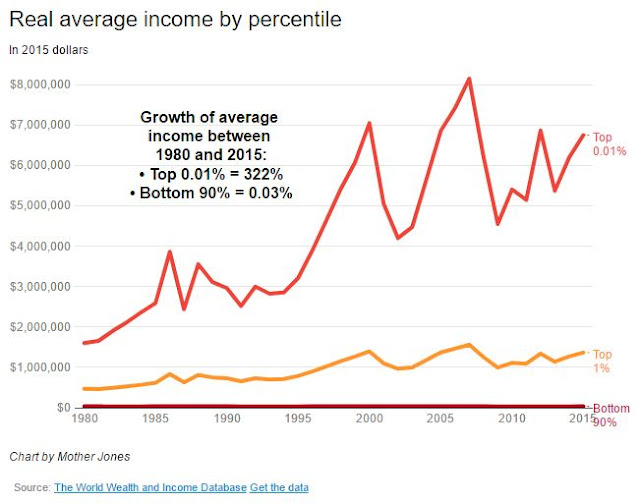 Most post-recession gains went to the top

Like millions of Americans, top earners took a hit during the Great Recession. But when the slump officially ended, they bounced back much faster and further than most. In fact, more than half of all income gain during the six years following the downturn went to the top 1 percent. 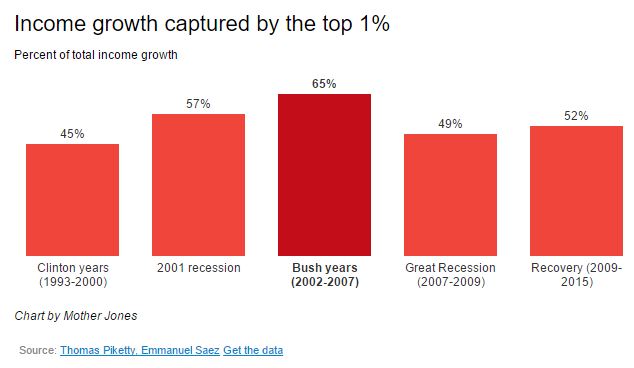 The situation for workers earning minimum wage remains bleak. In real dollars, the current federal minimum wage is worth 26 percent less than it was in 1970. Compare that to the increase in top incomes (like those of Trump’s pick for labor secretary, fast-food CEO Andy Puzder, a staunch opponent of minimum-wage hikes). 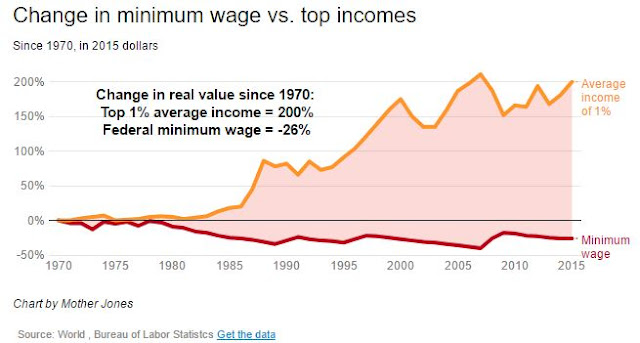 It’s not just about income, but wealth

The richest households have not only seen an upsurge in incomes, but also an accumulation of wealth in the form of property and assets. The recession tanked many Americans’ net worth: The median household net worth dropped 45 percent between 2007 and 2010. 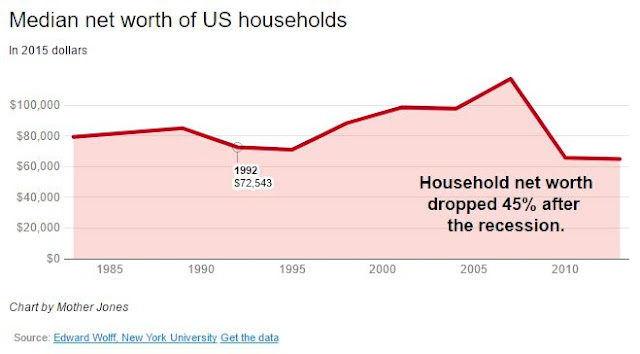 More wealth is trickling up

Here, too, the superrich are capturing the lion’s share of gains. Since 1983, the 1 percent’s share of total net worth has jumped to 37 percent, while the share of net worth held by the bottom 90 percent has slumped to 23 percent. “Income inequality has a snowballing effect on wealth distribution,” Saez and Zucman wrote in a May paper in the Quarterly Journal of Economics. “[T]his snowballing effect has been sufficiently powerful to dramatically affect the shape of the US wealth distribution over the last 30 years.”