Bringing the Reality of GOP Hypocrisy Home to Trump Voters

"Hardening" American Voters in Time
for the 2018 Midterm "Cash $torm"
The GOP Midterm Money Trucks
Are Already on the Road,
and They're Headed This Way
Mountains of oligarch GOP dollars really "delivered" in 2016,
so why not even larger "Super Mountains" of oligarch GOP dollars this time?
Unlike 2016, this time around, it will be totally legal. The brand new GOP Supremes said so.


Now that the disastrous Citizen United decision [A "Supreme ruling" which was bought and paid for by the same "patriots" we generally now politely refer to as "Republican Donors."] has had time to politically "mature" a little, the ambitious American oligarchy crowd are now closer than the breadth of "a ship rat's whisker" to permanently installing themselves as monastic masters over the tatters of the old democracy. There is, unfortunately, not even the smallest part of this which we might consider "temporary."

Don't think "temporary" or "for the time being," think in terms of "dynasty."


Reclusive, uber patriotic types like Mercer, Adelson and the Koch brothers are already fully in command of the Republicans in the House and Senate. After the Congress failed to "deliver" the loot from cashing out ObamaCare and Medicaid, these same, fun loving billionaires threatened their  GOP Congressional toadies with a wall to wall "scorched Earth" session of dried up campaign contributions. [Angry GOP Donors Close Their Wallets/POLITICO]

Now, if you are aspiring to be a very well paid, elected Republican in the Congress, there is nothing in the physical universe more terrifying than the prospect of getting "shut out" from billionaire dollars at campaign time. Because voters won't "eat the dog food" of standard GOP political policies, Republicans find it desperately necessary to sustain a monumental structure of very expensive, state level election crime schemes such as engineered voter suppression, payroll depleting, "expert" gerrymandering technicians and highly trained professionals with graduate degrees [in something or other...] to conduct incendiary, rancid, right wing media "reporting."

Finally, it's important to note that establishing and maintaining an effective information bubble around this beleaguered 30% is an absolute necessity for the scheme's success. That also costs money. Plenty of money.

MeanMesa may be able to offer a solution to this problem -- even if it is only a partial solution. [The solution mentioned here is presented at the end of this post.] This merits an explanation. This solution is partial because its execution is based on the idea that American voters actually have some idea of what is happening in the country. When, thanks to billionaire financed right wing hate media, voters have absolutely no idea what is happening in the country, lamenting about the suffocating hypocrisy of Trump's roughly 30% of electoral supporters, makes such complaints utterly irrelevant in the practical sense.

However, before we begin, we should probably take a closer look at hypocrisy in general.

A Wee Bit of High Desert Philosophy Concerning "Hypocrisy"
and Two "Illuminating" Quotations From George Gurdjieff
While this blog may originate in New Mexico,
there's no reason not to "open up" this post with some classier, international stuff.

Obviously, it's time to introduce a few of MeanMesa's thoughts on hypocrisy. [Two quotations from George Gurdjieff are included to attribute these thoughts to their origin.]

This destructive practice must surely have begun when issues of conscience was, suspiciously, deemed too tedious for those commonly practicing the more or less average mentation of normal humans. Almost immediately, various religious types offered the quite convenient alternative of morality -- most of it enforced on unsuspecting congregations by the promises of all manner of supernatural rewards and mythological threats. This destructive "new idea of the moment" opened the flood gates for every illegitimate religious franchise of the time to expand itself "to its fullest  market potential" while, simultaneously, provided a fabulous "career opportunity to really rake in the dough."

The fundamental difficulty, both at the time of its invention and henceforth until today, with this seemingly superior, modern approach was that immediately following conducting one of the "morally prohibited" activities, the "perpetrator" could spontaneously -- and, in the absence of conscience, effortlessly and painlessly -- begin the mental construction of every possible reason, explanation or justification for having done whatever violation had just been committed. Naturally, although now no longer "bothered by the pangs of his conscience," this "perpetrator" not only began to be exposed to the criticism by those nearby of "being hypocritical" but also developed an extreme "sensitivity" to what was imagined to be the "hypocrisy" of others.

In no time the "duty" of "noticing" and "identifying" hypocrisy -- including the "righteous indictment" of any "perpetrator" who was behaving "hypocritically" -- grew from being simply a "casual indulgence" into becoming a "full time job." The religious encouragement and validation of this new "self-indulgence in artificial piety" became so popular that it started to, literally, "fly off the shelves."

[This blog visited this phenomenon during a particularly uncomfortable "outbreak" of political hypocrisy in 2008: Hypocrisy Hunting In the Urban Wild Lands/MEANMESA]

Finally, we can "sum things up" with these two very interesting quotations from Mr. Gurdjieff. [Ouspenky, P. D., In Search of the Miraculous - Fragments of an Unknown Teaching, Harcourt Brace Jovanovich, 1949]

But conscience is the fire which alone can fuse all the powders in the glass retort which was mentioned before and create the unity which a man lacks in that state in which he begins to study himself.

The concept 'conscience' has nothing in common with the concept 'morality.'

Conscience is a general and a permanent phenomenon. Conscience is the same for all men and conscience is possible only in the absence of 'buffers.' From the point of view of understanding the different categories of man we may say that there exists the conscience of a man in whom there are no contradictions. This conscience is not suffering; on the contrary it is joy of a totally new character which we are unable to understand. But even a momentary awakening of conscience in a man who has thousands of different I's is bound to involve suffering. And if these moments of conscience become longer and if a man does not fear them but on the contrary cooperates with them and tries to keep and prolong them, an element of very subtle joy, a foretaste of the future 'clear consciousness' will gradually enter into these moments.

Target Practice: Firing Blanks at Short Range
Awakening Trump's Base to GOP Hypocrisy
30% of American voters seem to have forgotten that elected Republicans
in the House and Senate are supposed to -- at least occasionally --
do something -- anything -- for their constituents.
Most of them apparently never knew this in the first place.

Now, don't expect that any potential "remedy" to this problem might be as simple as "falling off a log." Should any among this blog's visitors regard such a statement to be just another liberal  exaggeration, consider the following anecdotal "conversation" with one of the voters in Trump's 30%. The fact is that nothing -- absolutely nothing -- rises even close to a point which might fracture the  amazing, blind loyalty of Trump supporters.

Ask your Trump supporting acquaintance this completely reasonable question: "What have Republicans done for you lately?" [Go ahead. Allow "lately" to be "in the last fifty years.]

Be prepared. The expected response to such a question from a Trump supporter will be to avoid any particular answer [Clue: there aren't any.] and divert immediately to "who's to blame" that this is the case.

While 70% of American voters are, at least to some extent, quite concerned about precisely who actually "owns" the US government, another 30% [Trump's base] of Americans continue to stare bleakly through the right wing's well financed, murky cloud of "engineered media" might or might not be concerned -- if they were aware of the danger. Sustaining the "information bubble," as mentioned above, is an expensive and, at least occasionally, a task with more than a few somewhat fickle subtleties.

Still, the oligarchs who are financing this scheme are somewhat reassured with by the fact that even so much as a "mere whisper" of a "slip" in this glacier of carefully crafted propaganda only very seldom serves to "wake up" one of these meticulously groomed "true believers."


MeanMesa's Solution:
Awakening the Sleeping
Exposing the "money men" who have purchased the government
Just remember.
Not all of the Trump supporters find hypocrisy -- or oligarchy -- frightening.


For both the midterm election scheduled for 2018 and for all the elections following it every effort must be undertaken to very visibly expose precisely who has paid for every commercial. No political commercial has ever simply appeared spontaneously as a mysterious silhouette stumbling forward through the fog.


Nonetheless, just about every political commercial's "bank account, sugar daddy roots" are very intentionally -- and very effectively -- obscured behind a maze of political action committees, "grassroots" single interest organizations and out right, "patriotically motivated" billionaires hidden behind the locked gates of country clubs and gold courses. Further, all the dollars which pay for these commercials are, in fact, promoting "something," but that "something" usually has only the most politically tenuous "connection" to what the commercials seem to be promoting.

We have to face the fact that there are a lot of things which need to be done to rectify this anti-democratic anomaly. However, an inescapable, legal requirement that every political campaign commercial's funding must be disclosed when it is broadcast would be a great start. No candidate should be using money from a source which cannot be openly disclosed to the targets of the advertising.

Further, this "disclosure" cannot amount to simply a high speed rumbling about the "Liberty Loving Citizens in Favor of Something or Other." The seemingly revealing statement that "I am ...., and I approve this ad" really needs to include an equally transparent, additional statement about the source of the money which financed its broadcast.

And, by "source," MeanMesa isn't talking about a fund distribution labyrinth such as the tangled web of Koch brothers cash distribution organization. [The Kochs are a dangerous problem for the democracy, but they are far from the only one.] 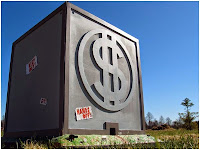 By 2014 this was already a clear problem. MeanMesa posted about a new effort called CASH CHECK. You can read about it here - CASH CHECK Lighting Up The Clown Car's Check Book/MeanMesa

It is definitely an idea worthy of consideration. The best part is that we can do it!
Posted by Chad H at 3:42 PM