The Price We Pay For A Geriatric Congress

Should We Automatically Trust Old People?
Should we automatically distrust young people?
Trump and Bernie were already well over seventy years old
when we started considering to trust either of them.

Why is this important?

All sorts of mental constructs change with age, and not all of them can comfortably be described as the "wisdom from years of experience." Plenty of old people are just as vacuous, uninformed and uninterested as the flippant examples to be found among those with from fewer years.

This wide ranging discussion could ramble along addressing many topics, but for this post, we'll need to consider just a few of them, that is, "topics" with formidable consequences with respect to how things will go in the near future. There are some "high stakes games" unfolding, and these "geriatric perceptions" in the minds of admittedly powerful players will determine the outcome for everyone.

MeanMesa can absolutely authenticate the proposition that "being in the Social Security phase" will definitely alter one's outlook on all sorts of matters. [MeanMesa has posted about this previously: America's Dark New World of Total Mistrust/MEANMESA]

Nonetheless, we find ourselves with an extremely difficult reality -- far too many of the current leaders in our government are literally ancient. Some have grown quite mean with their years, others are "waltzing" with outright senility. More than a few have lurched deeply into a convenient, moral stoicism, becoming consumed with carving out all possible wealth for their families and heirs while necessarily forgetting the burdens of the high borne oaths they've sworn all those years in the past. 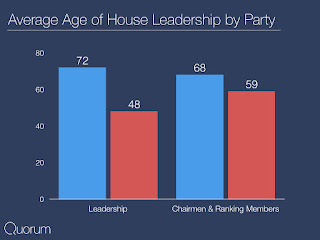 The 115th Congress Is Among the Oldest in History

Democratic leaders in the House are two decades older than Republican leaders.

Have a look at the diagram [below] provided by Congress by the Numbers/LEGISTORM. Consider the "slices of the pie" occupied by the "over 50" crowd when compared to the "30-39 year old slice" seated in the Congress. When the "60 to 80 year old slice" is added to the balance, the situation becomes, well, even more geriatric.

Congress By The Numbers 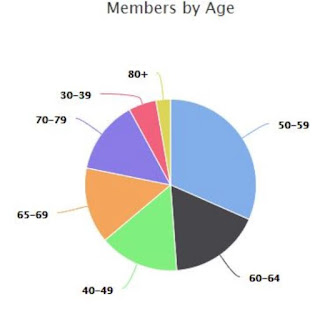 All of this could simply "introduce" a literal plethora of quite scholarly ideas about the impact of the situation, but for this post, we will focus on a single, quite relevant choice among those issues.

Can Grandpa Really
Face Up To the Russians?
If the Russians dive into the 2018 midterms like they did in 2016, our days
as a representative democracy have probably ended.
An unpleasant blend of malice and stupidity.

Face it. The American electorate was savaged by the propaganda attack last year. Further, it is not a "hotly debated topic" that this was possible because millions of Americans are not educated enough to even so much as suspect they were being targeted by a hostile foreign adversary.

Here's the bad news:
Those voters are not any more educated or politically sophisticated now, than they were then.

Don't expect that we find this threat somehow reduced because of the "progress" made since the catastrophic election of Donald Trump. The Russians will be coming back, again. In fact there is little evidence that the Russians are not "equally present" in our US politics right now.

On a more positive note MeanMesa is convinced that the US is quite well prepared to "make the Russians pay handsomely" for what they did to our 2016 election. We have the expertise, and we have the equipment to reduce the Russian Federation's everyday functioning to an absolute, cybernetic mayhem.

Further, it is certain that we even have the money and the brains to create any of the additional "moving parts" we might need to accomplish this.

Okay, there really is a bit of a problem that the country is currently crippled by an un-elected President who is, apparently, quite beholding to the oligarchs in the Russian Mafia, but even this  sorry state of affairs would -- in more normal times -- still leave a Congress not at all interested in losing control of the country.

With this said, the point of this post becomes clear. Far too many of the sitting Congressman and Senators are far too old and not nearly "tech savvy" enough to 1. comprehend the Republic wrecking gravity of this vulnerability, and 2. to have even a fleeting idea of what role -- if any -- they might play in national efforts to counter it.

Adding to this, there are two additional problems. First, we see plenty of evidence of the active resistance of the Commander in Chief to take these necessary measures to secure the nation. And, second we watch the inebriated passivity of those in the Party controlling the Congress. Now that they have made such progress in their scheme to abscond with several trillion dollars from the Treasury, the House and Senate Republicans are showing very little interest in pursuing any action beyond simply enjoying their popularity with the Owners of their political regime.

The entire Republican legislature is paralyzed. At this point the mere making minor repairs on an Interstate highway or the temporary extension of children's health insurance would amount to an astonishing accomplishment for them.

The Russian incursion cannot be met by a country now utterly devoid of leadership. This situation has become far more dangerous than the American "man in the street" understands. Whether attributed to raw avarice or shocking incompetence, the Republicans sitting comatose in the cynical "after glow" of their tax scam are guilty of treason.
Posted by Chad H at 4:45 PM

Labels: age of Congress, picking old people for leaders because we trust them, treason or incompetence in the Congress, unable to stop Russians